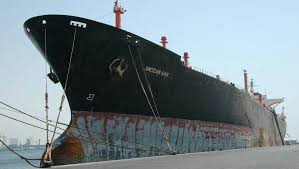 Eleven crew members apprehended aboard the vessel were also paraded at the Nigeria Navy Ship, Warri naval base, Delta State.

Parading the vessel and the suspects, the Flag Officer Commanding, Central Naval Command, Yenagoa, Apochi Suleiman, said the vessel was apprehended for lack of valid documents, in addition to being in possession of the suspected stolen crude oil.

Mr. Suleiman, a rear admiral, said the vessel and its crew members were intercepted on November 15 by naval personnel on routine patrol along Forcados offshore in Burutu Local Government Area of Delta.

He said the suspects were currently being interrogated, adding that they would be handed over to the appropriate authority as soon as investigation was concluded.

Mr. Suleiman said the arrest was a major breakthrough in the war against oil theft and other criminal activities in the waterways.

He warned those engaged in the illicit deal to desist from it, describing it as economic sabotage.

Also speaking, Raimi Mohammed, a commodore, said the Navy was determined to fight the illegalities in the territorial waters to a standstill with the use of ​its ​equipment.

According to the Navy, the captain of the seized vessel admitted to the crime, adding that he had made about three trips conveying crude oil or refined product from Nigeria to Ghana and Cameroon.

“Before my ship was arrested by the navy, it was leaking and we run out of bunker and victuals.

“We also suffer in the hands of pirates while heading for Forcados to receive bunker and victuals from someone who promised to assist us,” Mr. Mohammed said.