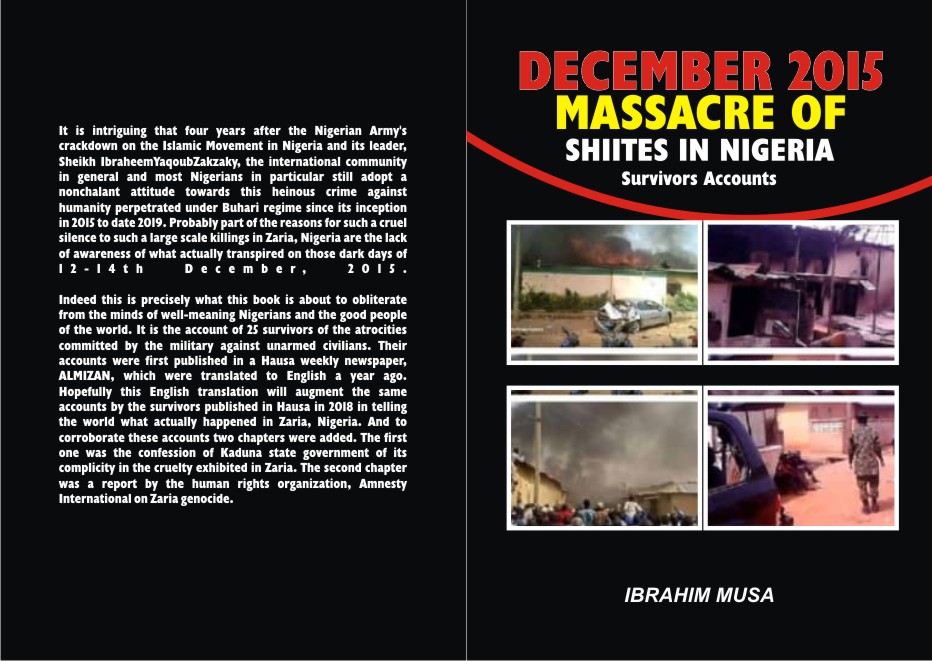 December 12th to 14th, 2015 will pass in the annals of Nigerian history as one of the darkest weekends, when a unit of the Nigerian Army was sent to exterminate the Islamic Movement in Nigeria, its structures and leadership. By the time the operation was over in the early morning hours of December the 14th, over a thousand unarmed civilians were killed with some burned in the most gruesome manner.

This is not new to most of those following the news from Nigeria for the past four years, mostly due to the agitation by the surviving members of the Islamic Movement for the freedom of their leader, Sheikh Ibraheem Zakzaky, who was also severally shot before arrest and subsequent detention incommunicado. This later struggle has also cost more lives of those involved because of the use of live ammunition by security agents sent to stop the agitators.

However, what this book adds is a new unique narrations of what actually happened on those dark days of 12-14th December, 2015 as told by the survivors of the heinous Zaria massacre as it became known.

This book “DECEMBER 2015 MASSACRE OF SHIITES IN NIGERIA: Survivors Accounts” sets out to tell the world this horrible massacre from the horse’s mouth.

A flip through the pages of the book reveals the accounts of 24 survivors of the massacre by the Nigerian Army, starting from the incarcerated leader of the Islamic Movement, Sheikh Ibraheem Yaqoub Zakzaky himself.

These testimonies by survivors was first published and made available for Hausa audience. This vivid translation has been rewritten and rendered into story format, which keeps the reader engaged till the end of the stories.

Another compelling feature of the book is the inclusion of the testimony the Secretary to the state government (SSG) of Kaduna gave the Judicial Commission of Inquiry (JCI) that was set up by the same government on the crisis. Also included is a brief report the reputable human rights group, Amnesty International brought out after an extensive but meticulous field investigation on the matter. This goes to massively corroborate the accounts of the survivors written in the book.

Finally, as the author of the book Ibrahim Musa, a veteran journalist said, the aim of the book is to bridge the communication gap that has existed between members of the Movement and Nigerian public in particular and the international community in general over the war crimes committed by the Nigerian Military in Zaria, Kaduna state, I think it will go a long way in doing just that.

You can grab your copy on Amazon over the internet by simply searching for the title.