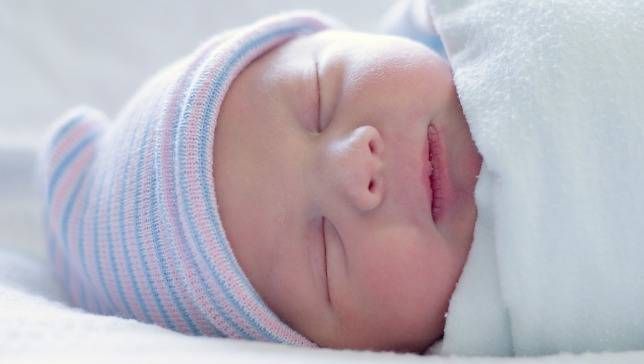 During the past month, articles appeared in several national and international news outlets, mainly the New Scientist, BBC News and the Independent, claiming that “cesarean section changed the alleged evolutionary process of birth”. An article published on October 26, 2016 in the Proceedings of the National Academy of Science was used as reference to these claims.

These headlines are usually designed to give the impression that a new scientific finding proved  evolution.  Such reports are often biased and aim to mislead the layman. Their publication in major scientific journals is also for the purpose of making them look credible. However, the scientific journals in question are under the control of the Darwinist dictatorship that tries to keep the theory of evolution alive, which is a completely collapsed theory in terms of science.

A thorough examination of the article shows that the topic is handled entirely ideologically, without any scientific evidence. Let’s now explain why such claims are completely unscientific, do not support the theory of evolution and are purely ideological.

The claim that “over time, baby head – maternal bone structure incompatibility has increased” is unfounded

The basic assertion of the article is that within the past 50 years, from the time the cesarean section has been inaugurated to the present day, head-to-bone inconsistency has increased from 30 to 36 in 1,000 births, which amounts to an increase of 20%. Was this result obtained by evaluating the actual data?

In fact, this article, which was presented by the media as evidence to the so-called theory of evolution, ironically offered its claims with the presumption that evolution is factual. The efforts to prove this claim, were supported not by actual data, but by statistical data derived from purely imaginary models.

The studies conducted showed that the situations of head-bone structure incompatibility resulted from environmental factors, which cannot have any effect on the genetic data.

The main factor in the incompatibility is that the fetuses are bigger. Compared to 50 years ago, there are many factors that can cause fetuses to be bigger today. The birth weight of fetuses may have increased due to reasons such as the better nourishment of the mother during pregnancy period, or owing to the increase in obesity and diabetes. However, this is not a genetic outcome, but rather an environmental outcome. If conditions were reversed, this effect would decrease and the need for cesarean section would decline. In addition, diseases such as hydrocephalus (dropsy in the brain) associated with structural causes may also prevent normal birth. But this does not occur due to a genetic change and is not a gain but a deformation.

In addition, the maternal bone structure, which is the other factor in the said incompatibility, can vary independently of the genetic structure. The studies showed that even in maternal twins, who share the same genetic code, the hipbone size may differ and that the environmental factors play a more pronounced role than genetics. Even as an adult, the bone structures may change shape. Another example relates to the different male and female hipbone structures. Brothers and sisters, although sharing same parents, will have completely different hipbones. A mother with a male-type bone structure could have never given birth to her child.  As the bone structure develops, the cells take shape as if they are conscious whether they are in a male or female body.

An unscientific claim without genetic basis

When we examine the article, it becomes evident that no information other than statistical calculations is presented. This shows the unscientific nature of the piece, as the presented statistical data is only related to social preferences. No change in DNA sequence takes place. Furthermore, the accurate development of bone structure requires the harmonious coordination of tens or even hundreds of different gene regions. The difference between the genetic codes of humans is very little if any, and these differences are located at non-coding regions. The immense diversity in the physical appearance of human beings is due to epigenetic and environmental factors. Environmental factors only make some genes dominant and some recessive; they certainly cannot add new information to genetic information. In other words, there is no difference between the genetic code of the first human being that ever lived and those that live today.

No structural change has taken place in the humans, as also shown by the human fossils that have been examined. This also applies to mother’s bone structure as well as the structure and size of the baby’s head. The birth takes place always in the same manner. According to the evolutionist thinking the birth process has to get easier over time through the enlargement of maternal bone structure or the reduction of the size of the baby’s head but such a change has never happened and it cannot happen because the so-called process of evolution is nothing but a deception. Throughout the thousands of years of the history of mankind, difficult births have always existed, but the birth process has always remained the same.

Birth is a miracle

The timing of birth is perfect. The pregnancy, which lasts about 38 weeks, ends with birth at a very delicate time. If the birth takes place a few weeks earlier, the baby may have a life-threatening condition because she has not completed her development. If birth occurs one to two weeks late, this time there is not enough room for the baby, nutritional problems arise, and the baby can get too big to fit into the birth canal. Neither the mother nor the fetus are aware of these processes. The birth pangs begin at the right time, the cervix opens up and the tissues become more flexible. Moreover, the fetus has to make some movements such as rotation, flexion, and extension to enter the birth canal in the most suitable manner. Nearly every fetus makes these moves  completely and in the right order. Instead of seeing the intricate balances and perfection in the process, trying to find faults and focusing on illogical conclusions, is nothing but a serious lapse of reason.

As seen in this article as well, Darwinists constantly seek to use the fallacy that ‘’life emerged by chance’’ to keep their theory alive. In an attempt to do this, they try to ignore the miraculous structures of human beings and other living beings, and seek to give the impression that there are deficiencies. In this way they try to proselytize the idea that they have has and could have been more perfect. However, these people who know the subject in depth are actually well aware that living things, and most notably the human body, are perfectly equipped with the most flawless structures. However these people insist on ignoring this fact. As they are aware that talking about this fact, will completely destroy the theory of evolution.

The birth process is one of the prominent examples of the miracle in man’s creation. Numerous mechanisms, all of which are indispensable, come into play at the same time. Neither the fetus nor the mother can live in the absence of even one of them. For this reason, these features must have existed since the first birth. While even a single birth is a miracle in itself, billions of miraculous births have taken place until today. The fact that some births are difficult does not mean that this miracle should be ignored. The glorious art of creation of God becomes even more evident as one examines further the details of the birth.

Our Almighty Lord said in a verse: “Did We not create you from a base fluid? Then place it in a secure repository for a recognized term? It is We who determine. What an excellent Determiner!” (Surah Al-Mursalat, 20-23)

In conclusion; no cesarean section, nor any other kind of intervention during birth, is a situation that will lead to the formation of larger babies in future generations. Just as the increase in the knowledge and the skills in this age of science cannot lead the new-generation with higher IQ levels than previous generations, the cesarean section, too, cannot change the physical structure of the mother or the baby. The main reason for the increase in cesarean section rates is the change in environmental and social effects. And environmental factors can only affect to the extent that our genetic structure permits.