On the exact date the president of Nigeria predicted, the Nigerian military has claimed the recapture of Gwoza; the major Boko Haram stronghold.

The clear details of the claim are yet to be made and what happened to the thousands of Boko Haram terrorists holed-up in Gwoza is yet to be known, but the Defence headquarters claims the local government has been recaptured and “mopping-up” is in progress. Rumor has it that the Boko Haram leader, “Abuakar Shekau” was in Gwoza as well as some of over 200 abducted Chibok girls. There is not report on this yet.

Journalists have had limited to no access to the battle scene and recently AlJazeera journalists were even arrested for “loitering.”

Goodluck Jonathan had predicted that Gwoza will be liberated today, Friday, the eve of the elections.

Here is the DHQ Press Release:

Sequel to the violent and heinous crimes perpetrated by terrorists in North Eastern Nigeria, the Armed Forces of Nigeria was tasked to halt the carnage and restore sanity in that region. This resulted in the deployment of land and air forces.

The deployment denied the terrorists the freedom of action they had hitherto enjoyed and they resorted to diversionary tactics known with terrorist groups around the world by carrying out isolated attacks and bombings. The series of deployment and operational effectiveness of the military were however challenged by the porosity of the borders, which gave the terrorists leverage to operate in Nigeria and retreat into safe havens in neighboring countries of Niger, Chad and Cameroon. 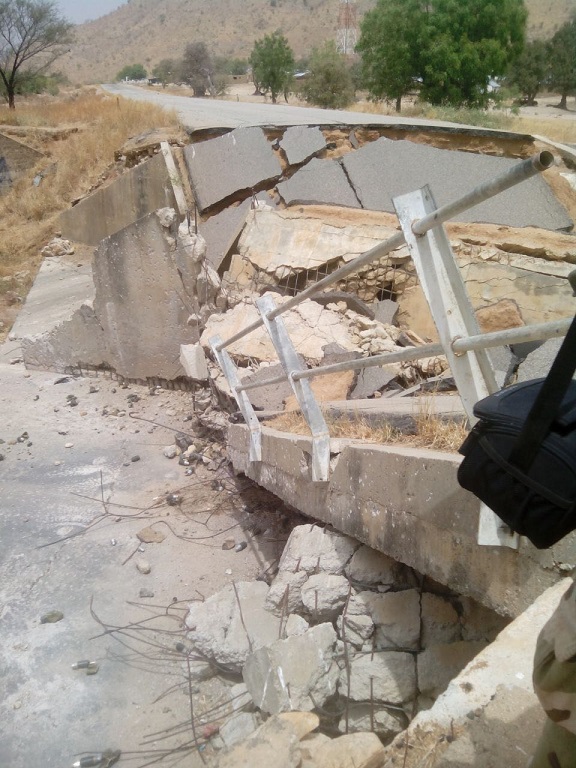 The recent reinvigoration of a partnership between Nigeria and these neighbouring countries under the auspices of Multi-National Joint Task Force (MNJTF) provided the desired response to the challenge, as these border areas that hitherto served as hideouts for the terrorists have been actively dominated by troops in the MNJTF. This development decimated the fighting capabilities of the terrorists, as the Nigerian military carries out a final onslaught on the nation’s enemy within the country. These successful operations have culminated in the dislodgment of terrorists from towns and communities in Adamawa, Yobe and Borno states.

Just this morning, the gallant troops of the Nigerian military in a concerted and well-coordinated land and air operations have liberated Gwoza, the headquarters of their so called caliphate which they renamed ‘darul hikima’. This was preceded by successive sack of terrorists from towns and villages leading to Gwoza, the main objective.   Several of the terrorists have died and many of them captured in the process.   A lot of arms and ammunition have been recovered and the administrative Headquarters completely destroyed. A massive cordon and search has commenced to locate any of the fleeing terrorists or hostages in their custody. As at yesterday, the military has been able to take over virtually all the enclaves and hideouts where the terrorists were marauding. It is observed that some of the terrorists are currently fleeing towards border areas. The fleeing terrorists will expectedly run into subsequent encounter with contingents of partners in the Multinational Joint Task Force who have been mandated to contain them accordingly. The mop up operation in Gwoza and other liberated areas will continue in order to ensure that no vestiges of terrorists or terrorism remain in our country.

The Nigerian military and security agencies therefore thank Nigerians and our partners in the sub-region who have consistently encouraged and supported us in the course of these operations. The military is more than ever before determined to once and for all stamp out every trace of terrorism and insecurity in our country. All citizens are urged to remain vigilant and report every movement or assemblage of suspicious characters to the security forces so that never again shall the evil elements re-group to terrorize or cause mayhem in our country.

Thank you and God bless the Federal Republic of Nigeria.