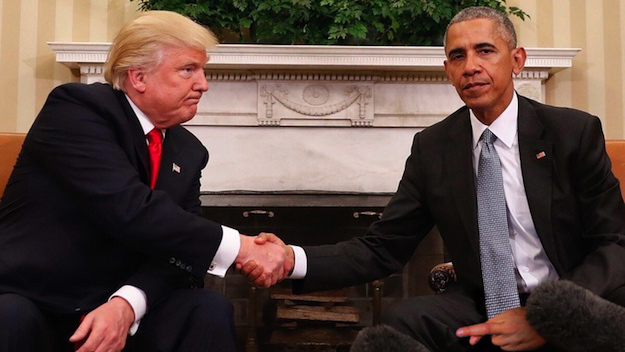 In 2010 after Omar Farouk Abdulmutallab, the Christmas underwear bomber’s attempt to bring a plane down over Detroit, the Obama administration enforced travel restrictions from 14 terror-linked countries.

Early that January Obama in an emergency order slammed extra foreign airport screening on passengers with passports or traveling to the US States from or through fourteen countries known to have major connections with Islamist terrorism (Afghanistan, Algeria, Iran, Iraq, Lebanon, Libya, Nigeria, Pakistan, Saudi Arabia, and Somalia, Sudan, Syria, Yemen…plus Cuba).

America’s new President Donald Trump on Friday put a four-month hold on allowing refugees into the United States and temporarily barred travelers from Syria, Iran, Iraq, Libya, Somalia, Sudan, Syria and Yemen. While more severe, with full bans to all travel through or from these nations, Trump’s list was half as long as Obama’s.

Lebanon, Nigeria, Algeria, Afghanistan were some of the countries lucky to escape Trumps ban.

While 15 of the 19 911 airplane hijackers were Saudi Arabian citizens, several reports have criticized Trump for excluding the kingdom which has severally been linked to financing global terror including the 911 attack on US soil.

While the US’ actions under Obama and Trump may be viewed as extreme or Islamophobic, it is important to note that wealthy Gulf nations that could comfortably assimilate the entire population of refugees have imposed similar bans on refugees from Syria citing security and politico-cultural threats. It is hardly worth mentioning that Saudi Arabia, the Islamic capital and other Arab Gulf states can hardly boast of ever accepting refugees from Sudan, Somalia, Yemen or other Muslim countries.

The repeated travel restrictions to Muslim nations should prompt a new drive for tolerance and peaceful co-existence as well as urge wealthy Muslim nations to do more for their Muslim brethren.

The pain for those affected by the bans can hardly be imagined but it is important to put things in perspective and find ways to take advantage of the hard-times to steer a new path in the Muslim world.