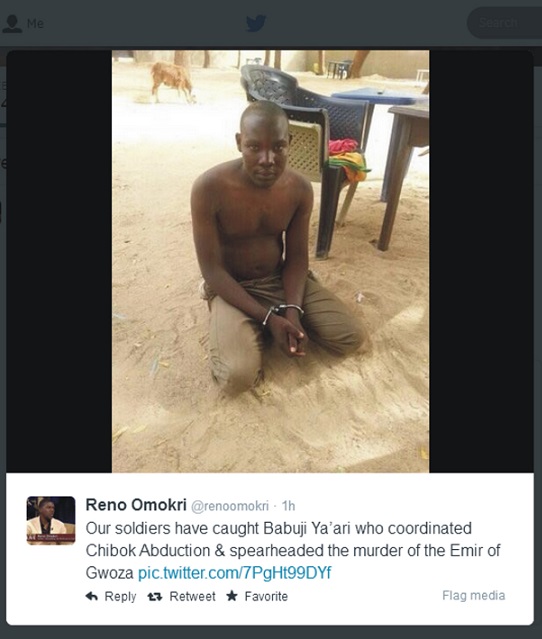 Nigeria’s military at its finest has again announced the arrest of Babuji Ya’ari, who it somehow announced it arrested about this same date last year, even using the same pictures this year that they gave the press last year.

Unbelievably, the same man was again “apprehended” one year later according to military briefings from Nigeria’s defense department this Tuesday. Associated Press carried the story, “(AP) — Nigerian troops have arrested a businessman accused of “participating actively” in Boko Haram’s mass abduction of nearly 300 schoolgirls from the northeastern town of Chibok last year, Nigeria’s Defense Ministry said Tuesday…. The accused, Babuji Ya’ari, led a “terrorist intelligence cell” for the militant group while disguising as a member of a youth vigilante self-defense group, Nigerian Major General Chris Olukolade said in a statement, according to the AP. Olukolade also reportedly said that Ya’ari’s arrest helped them take into custody other members of the cell “who are women.” However, he did not mention when these arrests were made or how many people had been arrested.”

Was the man released after his arrest last year?

Why will the Nigerian military not announce if he was indeed released and then announce his rearrest in such ridiculous fashion?

Is the Nigerian military simply playing games revising old stories and thinking this will pass? Is Nigeria’s military intelligence so shabby that we at NewsRescue discover such security blunders from them?

Nigerian activist Dr Peregrino Brimah of ENDS has made serous calls for Nigeria’s service chiefs to be retired and tried; barring media error, this is certainly a justification of the seriousness of that call.