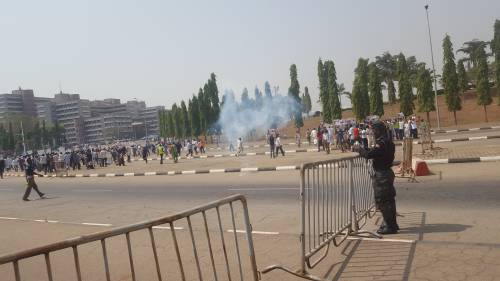 The Police and members of Islamic Movement of Nigeria (Shia group), on Wednesday, clashed at the entrance of the National Assembly Complex in Abuja. Members of the Islamic group had gone to peacefully protest the continued detention of their leader, Sheikh Ibraheem El-Zakyzaky, but were tear-gassed by policemen.

The placard-wielding protesters, in their hundreds, arrived the main gate of the National Assembly Complex singing anti -government songs and calling on the government to obey a court ruling directing the Federal Government to release their leader. Sheikh El-Zakyzaky has been in the custody of the Department of State Security Services (DSS) for over a year.

The Police had earlier appealed to the protesters not to proceed beyond the Federal Secretariat Complex, claiming that the rally constituted a threat to the public.

But the plea was ignored, with the protesters heading towards the main gate of the National Assembly Complex while chanting: “Free Zakzaky”.

The rejection of the plea not to take their rally beyond the Federal Secretariat Complex made the Police to literally use tear gas to disperse them.

The situation was stopped from degenerating when the police elected to use water canon to disperse the protesters. SR