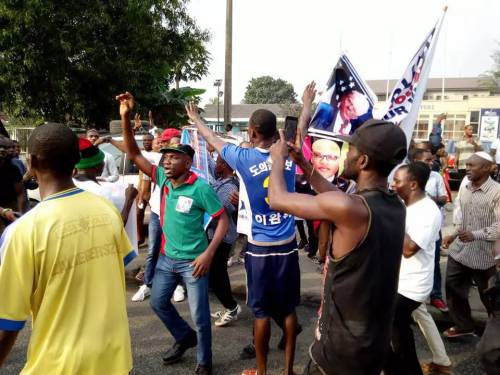 Members of Biafran separatist movement Indigenous People Of Biafra (IPOB) converged in Port Harcourt, Rivers to drum support for Donald Trump’s inauguration shutting down all commercial activities and creating a gridlock that grounded the state capital for many road users.

The procession which went through major streets of Port Harcourt, turned bloody when some Nigerian troops attempted to repel the rally at Garrison, St. John, and artillery axis of Port Harcourt beating and flogging protesters who disobeyed the order that asked them not to pass through the barricaded roads near a military facility.

Anuken Anthony, a member of IPOB, narrated how some of their members were arrested during the peaceful procession. “For now, over 70 supporters of MASSOB and IPOB have been arrested, and about 15 of them are in the extreme pain due to bullet wounds. Our members have taken some of them to the hospital; we are praying that nothing should happen to any of them”.

“I wonder where on earth the soldiers brutalize innocent peaceful protesters; military intimidation and harassment can not deter our support for Donald Trump. We were not violent during today’s rally we are only showing solidarity to an American President who we take as one of our own.”

But Rivers State Police, Command, spokesman, Nnamdi  Omoni dismissed the claims saying that details of arrests are still sketchy. “We ensure the protest was peaceful even though they didn’t seek permission nobody was injured as alluded,” he said

Meanwhile, one of the protesters,  Mr. Onyema Njoku said troops broke one of his legs with a gun, adding that he will take a legal action against the desperation and maltreatment by the military.

Photo of a protester brutalized by troops

Njoku said:  “IPOB followed due process to ensure that this rally takes place today. Some people protested for President Muhammadu Buhari in Abuja yet nobody shoots them.  Today, we are carrying out a peaceful rally and the police, and the military are shooting at us, it is bad.

“One of the soldiers caught me while I was trying to run away, he descended on me until he broke my leg, as I’m sitting down here I cannot walk. I’m waiting for my friends to take me to the hospital, I will get better, I know it is part of the sacrifice for freedom.”