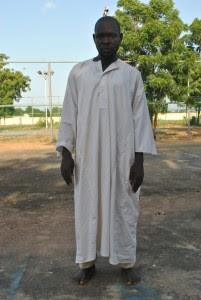 In an offensive operation to clear Boko Haram terrorists enclave around Kwatarha and Torikwaptir general area of Gwoza Local Government Area of Borno State, a notorious Boko Haram terrorist that had been wrecking havoc among the communities was gunned by our troops on Monday afternoon.

During the operation 4 other terrorists were believed to escape with gun shot wounds. An AK-47 rifle was recovered from him.

In a related development, troops of 3 Division have arrested a suspected Boko Haram terrorists group kingpin, Alhaji Tijjani Usman Damagum. He was tracked down and arrested at Damagum town, Yobe State yesterday. A high profile Boko Haram terrorists’ group member, he has led Boko Haram members on various attacks especially in Yobe State. The suspect is currently undergoing interrogation with a view to arraign him soon.