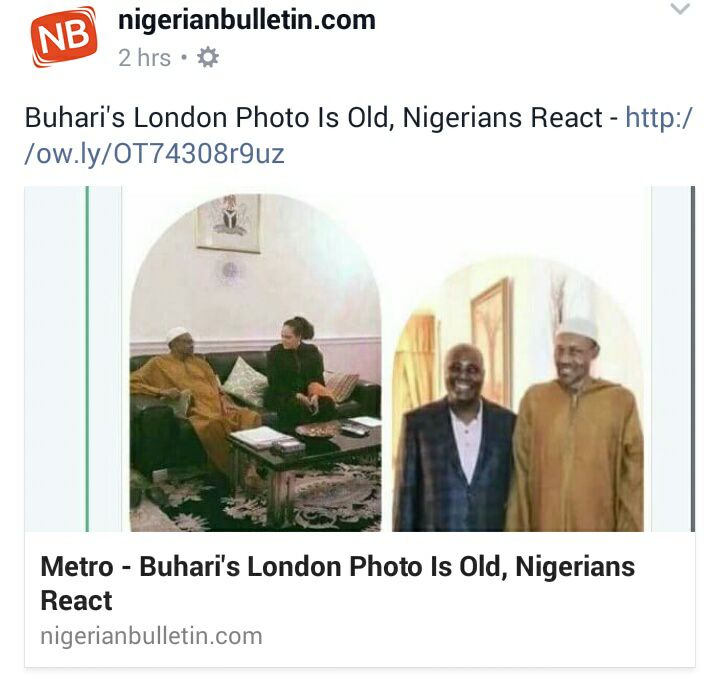 The photo that surfaced on Friday, January 27 of President Muhammadu Buhari in London has been labelled ‘old’ by some Nigerians.

In the picture shared by the All Progressives Congress (APC) London chapter via its Twitter page, the president was seen dicussing with Senator Daisy Danjuma while Ogun state governor, Ibikunle Amosun and the president’s chief of staff, Abba Kyari were also present in the room.

The picture was also retweeted by the senior special assistant to the president on media and publicity, Garba Shehu and the minister of aviation, Captain Hadi Sirika.

But some Nigerians have picked holes with the picture with a particular Twitter user (Oke Umurhohwo) saying the picture is old because Governor Amosun was in Sagamu for an event on the same day.

Lies. This is an old picture. Amosun was in Sagamu for an event earlier today https://t.co/5JFg1lf8B5

Some Nigerians also commented on the picture on NAIJ.com Facebook page.

One Christian Sunday wrote: ”Please can one quickly verify the picture. The verification shows the picture is a six months picture. The truth must be out in ten days I think.”

Moses Bassey wrote: ”I’m beginning to doubt the presidency handlers, this photo is not enough to convince Nigeria that the rumors going round is not true. There is nothing graphics can not do. Let him address Nigeria once and for all.”

Bright Anichema wrote: ”If truly the president is alive, so much effort shouldn’t be applied to prove it, a simple video call from the president would solve the problem, but since you have decided to keep deceiving yourselves with old pictures of the president, we will keep believing that all is not well with him.”

If Buhari is Okay, according to @GarShehu and @FemAdesina, no need to recirculate OLD picture claiming that its recent. pic.twitter.com/AujGIyhqBc

Chuks Iwuezi wrote: ‘These pictures only reinforce the suspicions bcos all three are same and one. Isn’t it better not to make extra effort to prove he’s alive and well? If he is he will come back.”

Emmanuel Igbonagwam wrote: ”This is pure photo shop. He should prove that he is alive by going to BBC live, CNN live and make a live broadcast.”

Isaach Isreal wrote: ‘This Picture is from the last time he went for ear infection. The man is dead!”