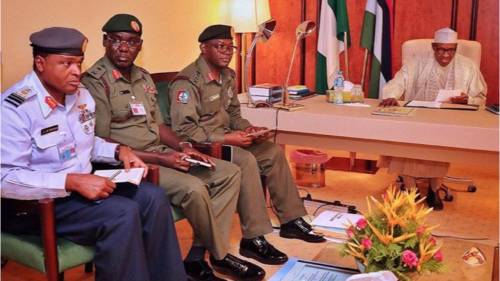 The Ministry of Defence together with the Defence Headquarters, the army, navy and air force got over N238bn in 2018 and 2019 to fight insecurity and implement their programmes and operations, according to reports from the Budget Office of the Federation.

According to SUNDAY PUNCH, the 2018 and 2019 Budget Implementation Reports was culled from the website of the Budget Office on Thursday.

The report stated that the Defence Ministry, the DHQ and the three arms of the military budgeted over N316bn for its operations and programmes in the two years.

The Federal Government, however, released about N238bn, which represents about 75 per cent of the appropriation.

Within the same period, the spate of the Boko Haram insurgency, banditry and violence in the country had gone up and at least 71 soldiers had been killed by terrorists and bandits between January and July, 2020 alone.

According to the 2018 Budget Implementation Report, the Federal Government appropriated N157bn for capital projects and operations to the military and released N132bn.

Meanwhile, for the 2019 report, the government allocated a total of N159bn for the military’s capital projects and programmes; it later released N106.84bn.

These sums are different from the $1bn, which the Federal Government approved from the Excess Crude Account to fight the Boko Haram insurgency in the North-East in December 2017.

The approval had been given at the 83rd National Economic Council at the Presidential Villa, Abuja, after a meeting that was also attended by the Nigerian Governors Forum.

It is not clear yet how and when the military got the monies, although part of the money was reportedly used to pay for the Super Tucano aircraft still being expected from the United States of America.