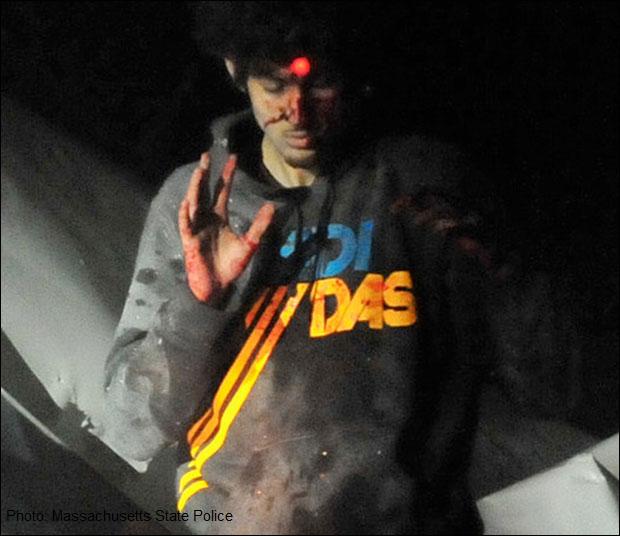 It’s another example of why you should never trust the government.

Back in April federal officialdom told us Boston bombing suspect Dzhokar Tsarnaev was shot in the throat and unable to talk. Massachusetts Gov. Deval Patrick was trotted out to confirm this fantasy story. He said Tsarnaev was in “serious but stable condition” and “not yet able to communicate yet.”

Then we were fed a more theatric version where the young Tsarnaev attempted to take his own life when he was supposedly trapped in a boat. “It is thought the teenager placed a gun in his mouth and pulled the trigger in a desperate bid to avoid capture and a possible death penalty,” claimed the British version of the National Enquirer, The Mirror. “Reports say the bullet passed through his throat, just missing his spinal cord, and  came out the back of his neck.”

This Hollywoodesque version dovetailed nicely with the story that the evil Brothers Tsarnaev were in a running gun battle with the cops, flinging home-made pressure cooker bombs at their brave pursuers as the pair attempted to escape the long arm of the law.

Then we were told Dzhokar was being treated by Israeli doctors who “have abundant past experience treating victims of terror… because they’re from Israel.”

“Tsarnaev is in stable condition but that because of wounds to his throat, he may never be able to speak again,” The Blaze reported, feeding the fantasy. In May, the story changed. It was said Tsarnaev didn’t have a bullet wound in his throat, but was cut. “I did see a throat injury. To me it looked more like a knife wound,” said Officer Jeff Campbell of the Massachusetts Bay Transportation Authority Transit Police SWAT Unit. “It wasn’t a puncture hole. It was a slice where it was spread open, possibly a piece of shrapnel from one of the explosives that they were using the night before. It didn’t look like a bullet wound to me. It looked like a cut of some kind.” Campbell was supposedly part of the team that apprehended Tsarnaev, so if anybody knew about his wounds, it would be Campbell and his fellow SWAT officers.

CNN later edited out the comment about the throat wound made by Campbell.

Now we have a photo of Tsarnaev allegedly surrendering. It was taken by a Massachusetts State Police photographer. CBS Boston reported on Thursday the photographer, Sgt. Sean Murphy, gave the photos to the Boston Magazine because he was upset by the Rolling Stone’s recent “glamorized” cover photo of the suspected terrorist. Murphy is under investigation for releasing photos to the magazine.

Note the absence of a throat wound in the photo.

The photo underscores the fact the government lied about Tsarnaev’s throat wound, as the photo clearly shows. Is there anything else the government is lying about? Is it possible the entire event is a government contrived fiction?

Now it’s time for somebody to release the video frame capture of the Brothers Tsarnaev dropping their bomb-laden backpacks, photos we are assured exist but were never released. Is it possible this is a lie as well?

Finally, it looks like the government no longer even cares about the quality of its deception. Earlier this week, a man we are told was Dzhokar appeared in court to plead not guilty to terrorism charges. However, according to a former wrestling teammate interviewed by the Boston Globe, the man in court “didn’t look like” Tsarnaev. Moreover, the man brought into court had a thick accent and Tsarnaev does not, as a cell phone video of him interacting with a child reveals (see video below).