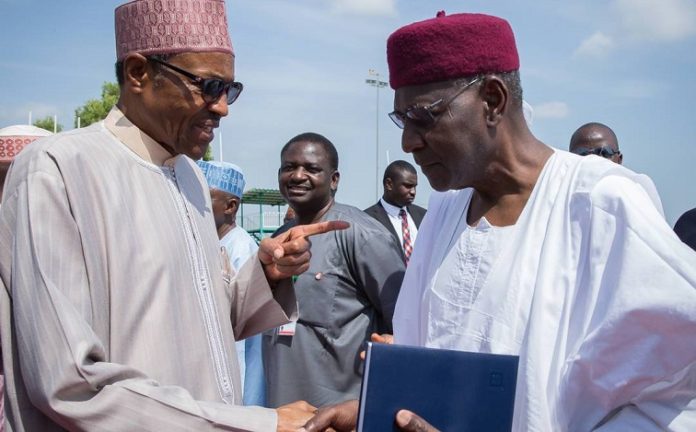 A lucrative contract for the procurement of defence equipment for the Nigeria Police Force appeared to have triggered the raging confrontation at the highest levels of the Buhari administration, PREMIUM TIMES can report.

Freshly obtained documents showed how the national security adviser, Babagana Monguno, tackled President Muhammadu Buhari’s chief of staff, Abba Kyari, for allegedly overriding a previous directive of the president in a contract to procure equipment for the police from the United Arab Emirates.

In the December 9, 2019 letter that was addressed to the police affairs minister and police inspector-general, Mr Monguno, a retired major-general, described Mr Kyari’s action as “reckless and irresponsible”, warning that it was capable of ridiculing Nigeria as an unserious nation before a reliable international partner.

Mr Monguno warned in the letter that Mr Kyari has been getting away with disregarding presidential orders to impose his own decisions — even though he had no constitutional power to issue directives on matters bordering on security. The NSA said only himself, as the head of multiple national security panels, and the defence minister have constitutional roles to act on security matters.

The documents appeared a part of a series of circulars issued between Mr Monguno and Mr Kyari between May and December 2019.

The first part of the documents to leak was first published by PREMIUM TIMES on Monday afternoon. It detailed how Mr Monguno accused Mr Kyari of hampering efforts to resolve insecurity in the country, sparking nationwide uproar and call for the president to take charge of his administration’s security measures.

The first memo also carried the same December 9, 2019 date, but was addressed to all crucial offices of national security coordination. The latest memo appeared to have been sent to inform the police affairs minister and the inspector-general on the background of the equipment and how Mr Kyari might be frustrating the procurement process.

It was not immediately clear which equipment were being procured by the Buhari administration from the Emirati, but Mr Monguno disclosed that the International Golden Group, a Dubai-based defence and security dealer, was the firm agreed between Mr Buhari and the UAE Crown Prince in 2016, the memo showed.

Neither the president nor anyone in his cabinet has commented on the crisis at the presidency since Monday. Mr Kyari and two presidential spokespersons, Femi Adesina and Garba Shehu, rejected requests for comments on the memo Monday afternoon. They also did not return similar requests based on the latest documents that shed additional light into the rancour.

Nigeria has been grappling with multiple security problems, most of which security experts have said should ordinarily be handled by the police. The military has been locked in a decade-long battle with Boko Haram insurgents ravaging the country’s northwestern flank and the neighbouring Niger, Cameroon and Chad.

Mr Buhari’s repeated promises to curtail insecurity have come short for the most part, despite billions spent on military procurement and capacity-building efforts.

Mr Monguno, who has continued to act as the NSA even though his appointment has not been renewed for Mr Buhari’s second term, has been at the centre of coordinating efforts to combat insecurity. But his labour, he said in the memo, has been regularly frustrated by Mr Kyari’s “meddlesomeness,” which has pitted the chief of staff to not just the NSA but other key administration officials over the years, including Vice-President Yemi Osinbajo.

The implication for the raging fall-out between the top aides of the president has dominated debates since the first memo was published on Monday. The opposition Peoples Democratic Party (PDP) has demanded a thorough investigation into the fallout, lamenting its potential detriment to national security.