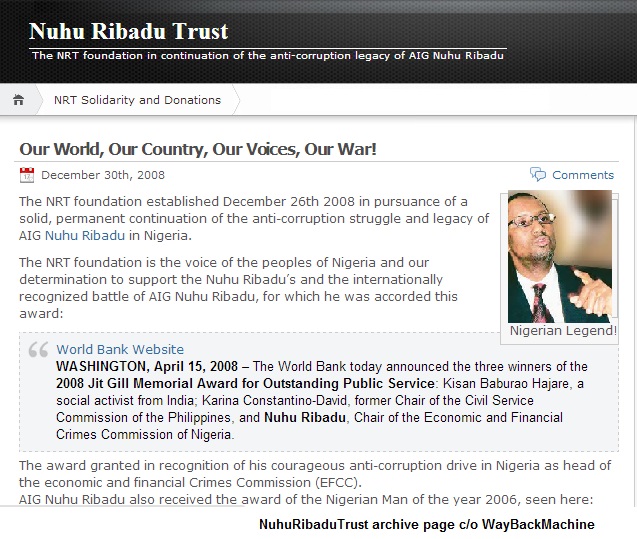 In 2007/2008 I purchased a website domain for Nuhu Ribadu. I did not personally know him nor he, me. I still am in no way personally connected to him, yet from then till this year I maintained a website for him. The website some may have come across was: NuhuRibaduTrust.com, NRT (Expired 2013)

The NRT website was simply an effort I paid for and a website/platform I developed to protect and promote the record of Nuhu Ribadu and defend him in the face of the persecution he was facing at the time. A comment on the site by Ayankunle Abayomi in NRT read: “I love Nuhu Ribadu. I believe God (Allah) will see him through. I love The Man Nuhu Ribadu. Thanks. I support him.”

“In every community the middle class makes or breaks such community .For a long time the middle class of Nigeria community has been quiet or dead. The issue of Ribadu has woken these class of people in Nigeria. Going by 98% of the comments posted here. Ribadu is one factor that has brought many Nigerians world over together and the topic is corruption! Corruption!! Corruption!!!.All these wonderful comments should be put into action. The time is now, no buts Ribadu is the best thing that has happen to the Nigerian community in the last few years. Thank to Obasanjo for giving the Nigerian youths the room and space to display responsibility as seen in most of the ministers he had in his cabinet. Ribadu is the president we needed so badly in Nigeria and the time is now, if we all work at it we will get him to be our president amen.”

Call me naive, call me a child, but I did respect Nuhu Ribadu deeply. I saw some hope in him, some truth in him. I knew he was not perfect. The reports of him being utilized to selectively pursue certain officials while permitting those who were “friends of his boss” was not something I discounted; however I said, that a man can dare to do what he did… can represent Nigeria proudly abroad… can catch as many cabal crooks as he did… can decline massive bribes as he did – to the obvious risk of his life, and later to the point where he had to escape on self-exile, made him a hero worth venerating. I believed that he had done (unusually) very much admirable good, and that good, and the story of that good should be preserved like a valuable gem… to use as an example and cornerstone to emulate and build upon.

If Ribadu could pursue all Obasanjo’s enemies and then Yar’Adua could (as he had started) pursue all of Obasanjo’s friends, Nigeria will be born again, I said. And it did happen that way till Obasnajo could not take it and started running helter-skelter and Yar’Adua died under suspicious conditions.

We cherished Nuhu Ribadu so much we gave him an award as the man of the year. And when the Nigerian government persecuted him, Bankole Ajayi commented on NRT: “Despite all the bank robberies, assassinations, massacre of innocent citizens, it’s a shame to Nigeria police force that they still have enough time to persecute and dismissed Nuru Ribadu our anti-corruption hero and our role model. Without fighting corruption there can never be any development in Nigeria. Be strong nr-our man of d year.”

Yes, Nuhu Ribadu was one of the few role models Nigeria has had in recent years. He joined the ranks of our martyrs, late General Tunde Idiagbon (killed), Murtala Mohammed (killed), Musa Yar’Adua (suspicious death) and our die-hard heroes, Fela Ranson Kutis, Fumilayo Kuti, the Oby Ezekwesilis (madam due process) and a very, very small handful of recent upright models Nigeria had to tout and have our children refer to.

Nuhu Ribadu was a man that I believed one day soon, God will give a powerful opportunity to again show Nigeria what unique talents and skills he possessed, and perhaps this time 100% and not hindered and controlled by a corrupt boss.

But all my dreams and hopes and confidence shattered this past week when Nuhu Ribadu defected to the ruling, thieving and killing people’s democratic party, PDP. It shattered last week when Nuhu went to join Diezani. When Nuhu agreed for money from the $4 million a day Diezani steals from the poor in her sole-controlled kerosene subsidy scam, to be used to finance his political career as a PDP politician. My confidence in people shattered when Nuhu Ribadu crossed over to join the political party of Senator Ali Ndume, a self-confessed Boko Haram modulator. My faith crumbled when Nuhu crossed to join Ali Modu Sheriff a Boko Haram founder; when he went to join Goodluck Jonathan the president who ruled Nigeria for the five years that Boko Haram who he said in August of 2012, were “his siblings” and “he will use kid-gloves/soft approach on” grew stronger and stronger and killed 100,000 innocent poor Nigerians in the north and displaced over 4 million farmers and abducted our children. My seeing Ribadu as a role model evaporated when he joined the party that has made a whopping $20 ($127 for all 5 years) billion missing, or as they call it, unaccounted-for.

No, I did not see Nuhu needing something so little as being a governor. No, Nuhu was already in President in many of our hearts. We believed he was a true man who would rather be broke, poor jobless and forgotten, than be in the limelight, dining with thieves and sponsors of terror.

We never saw APC as a political party that was constituted of people starkly different from the PDP, however APC not being in power gave it the excuse of not being the PDP party that had ruled for 15 straight years and plundered the nation dry and created 100 million desolate Nigerians living under a dollar a day while in parallel, making the most cabal millionaires and billionaires, the most private jet owner cabals in the world and making their handful of cabal coterie the world’s richest men. Yes, APC could perchance, perchance do something better, but PDP had already shown it was signed up with Satan. It already had too much blood on its hands. The den of killers as Soyinka promptly identified it. The Bible says, “Whoso is partner with a thief hateth his own soul: he heareth cursing, and bewrayeth it not. (Prov 29:24).”

Nuhu Ribadu became friends of thieves. He joined the party that had punished Nigeria for 15 straight years. It is better to hide under a rock till death takes you than to be part of this ruling evil.

While many of us who of course are far from perfect, keep fighting, keep encouraging ourselves to suffer, yet forge-on to protect our hearts and this society, to do more good and shun more evil, and give our children some few remnants of value to emulate, with hope that someday our struggle can become easier and good character and consciousness can be more common place; we lost one of our finest. After 27 years, something did change in South Africa, and patience made Mandela President. He never sold out. But we are not even in jail, yet we are selling and selling fast!

I feel really terrible, but I will continue to have hope in my people. Because the Lord says that after every, every single period of trial, there is a period of respite. Bye, bye, Nuhu. Bye, bye to your esteemed memory. You mean nothing to us.