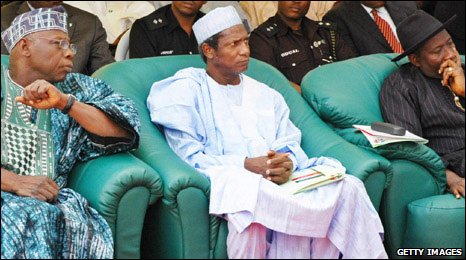 We have to call the public’s attention to recent broadcast of lies by former President Olusegun Obasanjo on the person of late President Umaru Yar’Adua.

In a recent book club Channels TV talk, Obasanjo claimed that late Yar’Adua told him that he overturned the sales of the refineries to cabal Dangote and Otedola due to “pressure.”

We veritably declare this a blatant lie.

Though Yar’Adua is no longer here with us, we will defend his name against slander by a desperate and vain glorious Obasanjo.

Late Yar’Adua overturned the sales of the refineries only after due consultation and due to corruption. He overturned the sales in the best interest of Nigeria, and was about to do the same to Transcorp also dashed to Obasanjo’s coterie of cabal friends, Tony Elumelu and co in the Obasanjo renowned cabalization process before he died under unusual conditions, suspected to be poisoning.

In July of 2007, barely 2 months into office, late President Yar’Adua held meetings with Bureau for Public Enterprises (BPE) to query the sale of Nigeria’s refineries to Obasanjo’s cronies. “After considering the facts presented to him, the President directed that the sale should be revoked as the exercise was not transparent enough.  The Nigeria Labour Congress (NLC) praised President Yar’Adua for the revocation of the privatization of the refineries.”

As Yar’Adua next went for Transcorp, Obasanjo panicked and started holding meetings with politicians including Atiku to find how to get rid of Yar’Adua.

“Aminu expects more of the same soon — particularly an overturn of the Transcorp purchase of the Abuja Nicon Hilton. Aminu also noted Yar’adua’s commitment to fighting corruption and told Post he gave the greenlight to the Economic and Financial Crimes Commission (EFCC) to investigate anyone.

“He predicted Yar’adua will overturn the Transcorp purchase of the Abuja Nicon Hilton soon. These deals will be aimed at removing the ill-earned gains of Obasanjo and his close allies such as Aliko Dangote. (NOTE: Dangote and Obasanjo’s Transcorp were both part of the consortium that purchased the Port Harcourt and Kaduna refineries.) Aminu claimed Dangote gave Obasanjo a 35 million USD jet plane as a recent “gift.”

Former Ambassador to the United Nations (1979-1983) Maitama Sule, a well-known confidante of late President Umaru Yar’Adua according to other cables, told US officials that Obasanjo was seriously worried Yar’Adua was going to prosecute him for corruption. Garba Shehu additionally relayed according to Cables that Atiku warned late Yar’Adua that Obasanjo was scheming to remove Yar’Adua from office due to these fears; what Obasanjo referred to as “Yar’Adua’s treachery.” Cable 08ABUJA457_a

The Refineries Have Always Been Ok And Ready To Supply Nigeria

There has never been any serious problem with Nigeria’s refineries. They have always been ready for full operation. The only reason why Obasanjo and Jonathan kept them non-functional was to feed the fuel cabal. This was why it took new President Muhammadu Buhari only a few months to get them fully functional. Obasanjo and Jonathan only used to pump trillions into alleged repair and refurbishing of the healthy refineries as another means of looting the nation’s commonwealth.

Atiku has currently wisely advised President Buhari to overturn the sale (cabalization) of PHCN assets. This is not “pressure” but advice in the best interest of Nigeria which we hope and believe Buhari will follow. PHCN/NEPA was similarly jeopardized by the corrupt PDP governments of the last 16 years, under supervision of the N150 billion stupidly bribed Senate and House of Assembly.

So we beg Obasnajo to stop defaming the great memory of late Umaru Yar’Adua who invented the EFCC go after anyone, bar none philosophy that Buhari is replicating today, known as the “EFCC Yar’Adua Card.”

Had Umaru Yar’Adua not died under suspicious conditions which his wife and Professor Ukandi G. Damachi suspected to have been poisoning (by Obasanjo’s kitchen staff who he fired immediately after suspecting), perhaps Obasanjo would have been convicted by the EFCC and sentenced. [Note: When Soyinka asked the FOI be used to probe Yar’Adua’s death, the Jonathan administration and Senate refused]

Obasanjo should enjoy the grace accorded to him by Nigeria and stop spinning tales. Though Buhari has so far said he may not investigate him, Obasanjo should know that Nigerians may soon well initiate a class legal case against him for his very many atrocities that he has not been forgiven for.