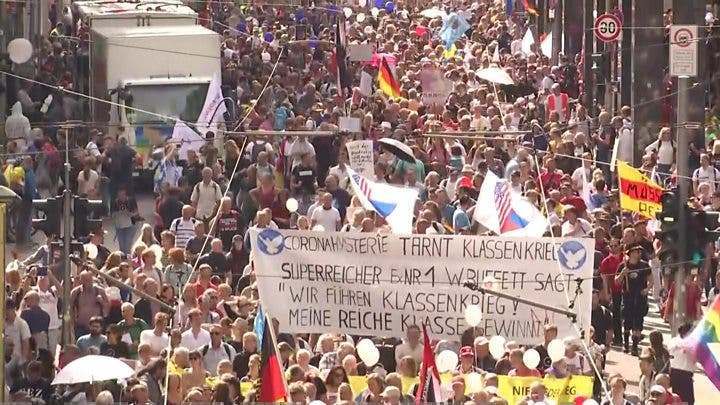 Some 38,000 people participated in a rally against coronavirus restrictions in Berlin on Saturday despite police efforts to disperse the crowds due to the risk of Covid-19 contagion.

Police said that some 300 people were arrested throughout the day as protesters from across Germany gathered at Berlin landmarks such as the Brandenburg Gate, the Victory Column and Reichstag.

Of those detained, around two-thirds had been outside the Russian embassy, where thousands of far-right protesters and members of the extremist Reich Citizens’ Movement pelted police with stones, bottles and other objects.

Not far away, a group of protesters broke into a restricted area near the Reichstag building, which houses the German parliament. They were able to storm up a set of stairs before being removed by police, according to a dpa reporter at the scene. Police used pepper spray on the intruders, resulting in clashes between the sides.

Blockades and sit-ins also took place in central Berlin, with a group of about 40 people gathering on Berlin’s Schiffbauerdamm street, protesters erecting a blockade on the Universitaetsstrasse avenue, and a container set on fire on Friedrichstrasse, a busy shopping street.

About 3,000 police officers were deployed across the city to maintain order at the demonstration, the second such mass protest against coronavirus rules this month in Berlin.

Video footage showed protesters being carried and dragged away by police.

The crowds included people from far-right groups, conspiracy theorists who do not believe Covid-19 exists, and anti-vaccination campaigners.

Symbols of right-wing extremism were on display at the capital’s landmark Brandenburg Gate and the surrounding area.

Participants held posters that read “Stop the coronavirus madness” and “End the coronavirus dictatorship” and carried banners calling for the government to resign and demanding an end to virus restrictions.

Lead organizer Michael Ballweg addressed the crowd at Berlin’s Victory Column, demanding that all coronavirus restrictions be lifted with immediate effect and that the government of Chancellor Angela Merkel resign.

The nephew of the late US president John F Kennedy also spoke.

Robert Francis Kennedy Junior – who is a lawyer, environmental activist and vaccination opponent – spoke out against the development of 5G cellular networks, warned against state surveillance and attacked Microsoft founder Bill Gates, who has thrown his weight behind vaccine development.

Earlier in the day, Berlin police said the rally must be dissolved because participants did not adhere to rules put in place to stop the spread of coronavirus. They said participants were not maintaining a safe distance and many were not wearing face masks.

Earlier this week, authorities had announced a total ban after an event by the same organizers at the start of the month was broken up because the participants – numbering tens of thousands – were not wearing masks or keeping the required distance from one another.

But organizers successfully challenged the ban in court.

Meanwhile, in Britain, thousands of people joined a “Unite for Freedom” rally in London’s Trafalgar Square against coronavirus restrictions.

Among the main speakers was David Icke, an eccentric conspiracy theorist and former professional footballer whose Facebook account was closed in May because he circulated misleading claims about the coronavirus pandemic.

Many protesters later marched to nearby Whitehall, home to government offices, where the Metropolitan Police said they ordered the group to disperse.

Icke told the crowd that a “deadly disease is sweeping the world.”