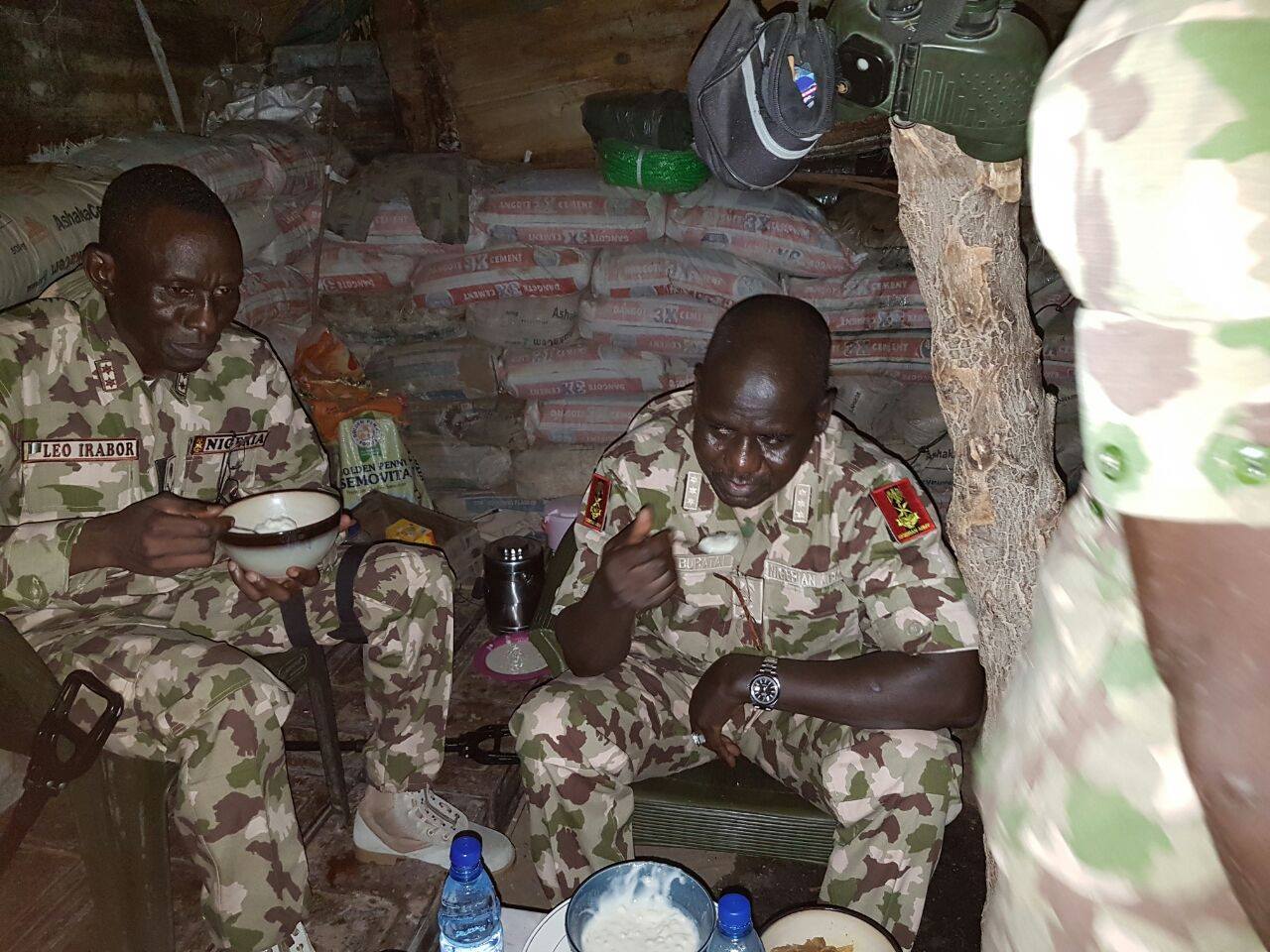 The commander of Operation Lafia Dole, Olusegun Adeniyi has been seen in a rare video lamenting that Nigeria’s soldiers are outgunned by Boko Haram terrorists.

Mr. Adeniyi, a major general, was leading a large troop of soldiers on a special operation when they came under heavy attacks by Boko Haram.

The commander was seen in two of four video clips giving a recorded situation report to the Chief of Army Staff, Tukur Buratai, a lieutenant general.

He blamed the deadly attack they suffered on “very wrong intelligence assessment” earlier conducted before they deployed.

“Since yesterday we have been met with very strong resistance – from more than pockets of Boko Haram. This morning, from every flank not least than 15 gun trucks were facing us.”

Sources familiar with the released video confirmed to PREMIUM TIMES that the videos were shot after last week’s attack at Gorji, a village in Yobe state.

Dozens of soldiers were ambushed and killed in the Boko Haram attack. The military initially said 47 died, but later reviewed the figure downwards.

When PREMIUM TIMES published the report, it was unclear that Mr Adeniyi led that operation.

In the video, the theater commander can be seen amongst a battery of barely organised troops lamenting that they suffered a massive loss of men and equipment because they were outgunned by Boko Haram.

Mr Adeniyi, who appeared in full combat kit, was seen in one of the videos tapping a trooper who was weeping, telling him it was not soldierlike for him to cry because his colleagues were killed.

“I know you were crying because they kill your regular…look at me, that is not the time to cry,” he said, as he kept jerking the shirt of the trooper who was apparently weeping.

In another video, the theater commander was seen and heard telling the soldiers that “it appears the people we are fighting have more firepower than us…”

He later directed the troops to gather all the bodies of the soldiers that paid the supreme price into available vehicles in order to quickly move them out of the danger zone.

The commander’s shocking revelation that the troops in the field are not adequately equipped and armed to fight, came amidst claims by the military authority that Boko Haram has been defeated.

Mr Adeniyi in the video revealed how he lost several types of equipment and was almost rendered immobile due to a massive attack on troops’ vehicles.

Facing the camera and addressing the Chief of Army staff, the Theater commander said, “Good morning sir, I’m standing here with Sector 2 Commander; the armed helicopter has just come to hover our air, the instruction I gave them was that anything they see moving they should engage because most of my gun trucks are not moving. Like I said earlier, the three battalions are fighting as deployed — nobody is running.

“But what we have here, I will give you some estimates, sir. Boko Haram has fired more than a hundred mortar bombs at us; they have fired 80 to a hundred RPGs at us; in addition to eight to 10 gun trucks firing at us from all sides. We have not run, and the soldiers are not misbehaving or disobeying orders.

“We have casualties. I will come and see you in person on what we need to do. But we are not running.”

Mr Adeniyi later pointed in the video at some of the MRAP trucks that have been demobilised after Boko Haram gunmen had shot its tires.

“As you can see over that’s one of ours that bullets tore, we lost about 20 MRAP tires here. We have changed close to 250 Hilux tires due to the terrain.

“This is what we are facing in the Timbuktu triangle, sir. We are not running, we are fighting as a system to curtail the situation and achieve your mission, sir.”