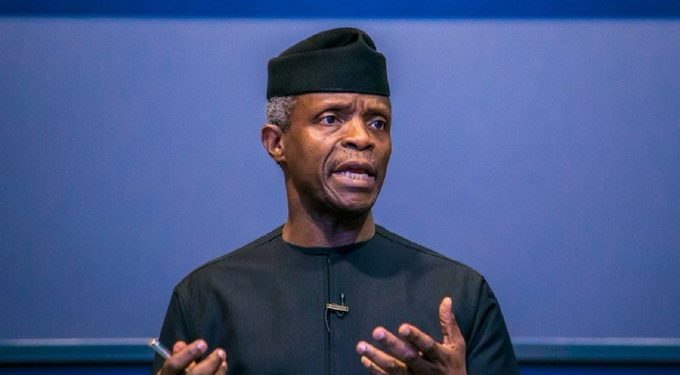 Nigeria’s Vice President, Yemi Osinbajo, has subtly condemned the SSS invasion of a court and re-arrest of Omoyele Sowore, by declining to receive an anti-corruption award days after the incident.

Mr Osinbajo, a law professor and Senior Advocate of Nigeria, has been criticised by many Nigerians for not commenting publicly on the Friday invasion of an Abuja Federal High Court by operatives of the State Security Service.

In what can be considered his first public statement on the matter, Mr Osinbajo told the Wole Soyinka Centre for Investigative Journalism (WSCIJ) that he could not receive an award he had been given, few days after the court fiasco.

“… in view of the developments on Friday in the Sowore case, I think it would be insensitive and inappropriate to attend the ceremony,” Mr Osinbajo wrote to the award organisers on Sunday.

His statement to the organisers was, on Monday, shared with PREMIUM TIMES by his spokesperson.

Mr Osinbajo had been named as the recipient of the Integrity Specialty of the Anti-Corruption Defender Award for his “invaluable work of overhauling the Lagos State Judiciary, facilitating far-reaching reforms in the administration of justice in the state, his work of promoting integrity in the civil society and business in Nigeria and his consistency as a strong voice for promoting integrity in the country.”

However, in a message to the organisers of the award, Mr Osinbajo said though he accepts the award, he could not receive it at this time for two reasons.

“The award, I note, is for our Justice reform efforts in Lagos State. I had accepted the award with pride on behalf of the excellent Justice Sector team we had.

“However, two reasons explain my absence. First is that I am currently in Abu Dhabi for an international meeting under the auspices of the government of the UAE where I am the keynote speaker.

“Second, in view of the developments on Friday in the Sowore case, I think it would be insensitive and inappropriate to attend the ceremony,” the vice president said.

The activist and a co-accused, Olawale bakare, had been released on Thursday night, 124 days after they were arrested by the SSS for calling for a nationwide protest against bad governance.

The Nigerian government charged them with treason, money laundering and insulting President Buhari.

Despite two separate court orders for their release, the SSS refused to release both men.

However, last Thursday, Justice Ijeoma Ojukwu ordered the SSS to release both men within 24 hours.

The agency complied with the directive on Thursday night before the court invasion on Friday at the same Mrs Ojukwu’s court.

Although the SSS later released a statement claiming its officials did not invade the court, Femi Falana, the counsel to Mr Sowore, said the head of the SSS team to the court apologised to Mrs Ojukwu for the invasion.

That court invasion and re-arrest of Mr Sowore has been condemned by many Nigerians as well as civil society groups.

A lot of the criticism of the SSS action was directed at Mr Osinbajo who is the second topmost official of the Buhari presidency.

The SSS Director-General reports directly to the president.

Without outrightly condemning the court invasion and Mr Sowore’s rearrest, Mr Osinbajo’s reaction to his award appears to show his disdain of the SSS’ action.

Earlier on Monday, the award organisers admitted they had received a communication from the vice president.

They announced a postponement of the award to Mr Osinbajo, also citing the treatment of Mr Sowore.

The centre had on Monday postponed the presentation of the award to the vice president following outrage over the conduct of the State Security Service at an Abuja court last Friday.

“The postponement was decided on, to align with protests against the repression of freedom of speech in recent times especially the incident between the Department of State Security (DSS) and Omoyele Sowore, Publisher of Sahara Reporters, on Friday 6 December. The Vice President himself shares this awareness and the inappropriateness of the award at this point,” Motunrayo Alaka, the Executive Director of the WSCIJ said.

The WSCIJ holds the award presentation event on December 9, the World Anti-Corruption Day and eve of the World Human Rights Day to highlight the importance of investigative reporting as a tool for accountability, good governance and social justice in a democracy.

Apart from Mr Osinbajo, awards would also be given to outstanding investigative journalists at the ceremony.

Amnesty International, a global movement promoting human rights in Nigeria and beyond, was also to be honoured with the Human Rights Specialty of the Anti-Corruption Defender Award for its “remarkable voice against human rights violations and oppressive laws, and its efforts to defend freedom of expression in Nigeria.”