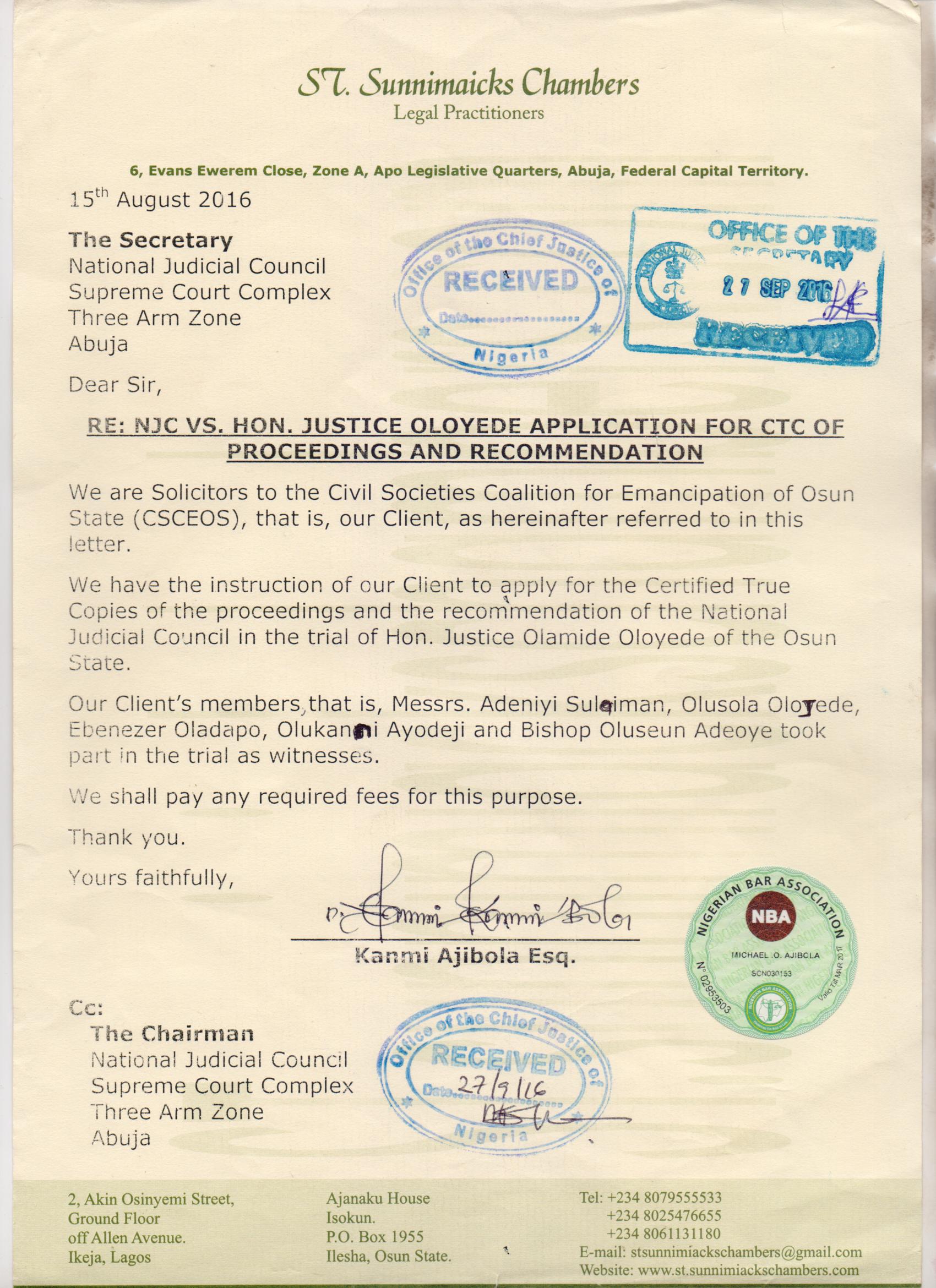 The Chief Justice of Nigeria(CJN) through the  apex body of bencher,
the National Judicial Council(NJC) has advised the leadership and
members of the civil group, the Civil Societies Coalition for the
Emancipation of Osun State(CSCEOS) to drag the body to the Court of
competent jurisdiction for an order on its request for the” Certified
True Copies”  of the proceedings and recommendation of the Council in
the trial of Hon. Justice Olamide Folahanmi Oloyede of the State High
Court, before the Justice Ibrahim N. Auta led panel in 2016.

It would be recalled that the NJC in its 77th meeting, which held on
July 15th, 2016, recommended that Honourable Justice Oloyede should be
retired compulsorily, for daring to call for thorough and credible
investigation into the alleged criminal mismanagement of Osun
State Public funds by Mr. Rauf Adesoji Aregbesola between 2011 and
2015 which made the State to be leading States that could not pay her
workers and retirees alike for period of eight (8) to ten (10) months
at the material time.

According to the NJC’s Letter dated 23rd of November, 2016 with
Reference No:NJC/S.29/HC.OS/16/1/408 which was signed by its
Secretary, Danladi Halilu,Esq.,OON on behalf of Chief Justice of
Nigeria and Chairman, National Judicial Council(NJC) and forwarded to
the Five(5) members of the Coalition who were witnessed during the
proceedings of the matter.

The NJC’s Letter titled:-“RE: NJC Vs Hon. Justice Oloyede.Application
for CTC of Proceedings and recommendation”, was sent to the Coalition
members through their Lawyer, Barrister Kanmi Ajibola and the copy was
made available to newsmen on Tuesday, they maintained that the Letter
was received lately and the group had concluded arrangement to file a
mandamus application before the Federal High Court to get an order,
requesting the Certified True Copy (CTC) as being directed by the NJC.

The Letter reads in part; “Reference your letter dated 15th, August,
2016 on the subject matter. I have been directed to inform you that by
the practice of Council, on Record of Proceedings or recommendation of
Council are released to the Complainant or Petitioner or Subject Judge
or Witnesses or any Institution, save by an order of the Court,
please”.

The group through its Lawyer,Barrister Ajibola  had earlier sent a
letter dated 15th August, 2016 to  the Council authority,requesting
that “We have instruction of our client to apply for the Certified
True Copies of the proceedings and recommendation of the National
Judicial
Council in the trial of Hon. Justice Olamide Oloyede of the Osun State.

“Our client’s members, that is, Messers. Adeniyi Sulaiman,Olusola
Olojede, Ebenezer Oladapo,Olukanni Ayodeji and Bishop Oluseun Adeoye
took part in the trial as witnesses. We shall pay any required fees
for this purpose”.

Speaking on the development, the leader of the group, Comrade Adeniyi
Sulaiman stated  that the group was suspecting the National Judicial
Council(NJC) of having hidden agenda over the matter and that was why
they were blocking all the ways for the group to get justice for the
courageous and incorruptible Justice Folahanmi Oloyede.

The rights activist reiterated the resolve of the group to use the due
process of law and the machinery of justice to challenge what it
perceived as illegal,illogical,unconstitutional, barbaric, archaic,
unconstitutional, undemocratic and manipulated 2016 Code of Conduct
for Judicial official, while the 2014 Code were invoked when the
purported unsubstantiated offence were committed by the jurist.

Sulaiman maintained that it has not been in the lexicon of the group
to silence in the face of injustice of this nature, describing
incorruptible Oloyede as a epitome of justice, humility, courage,
beacon of inspiration, respecter of rule of law and friend of the
oppressed, saluting the uncommon courage of Justice Olamide Oloyede
who sacrificed her comfort of office to give voice to the poor masses
of the State,

He then reiterated that the group would use every democratic means to
fight this battle until it gets justice for the incorruptible
Justice Oloyede. 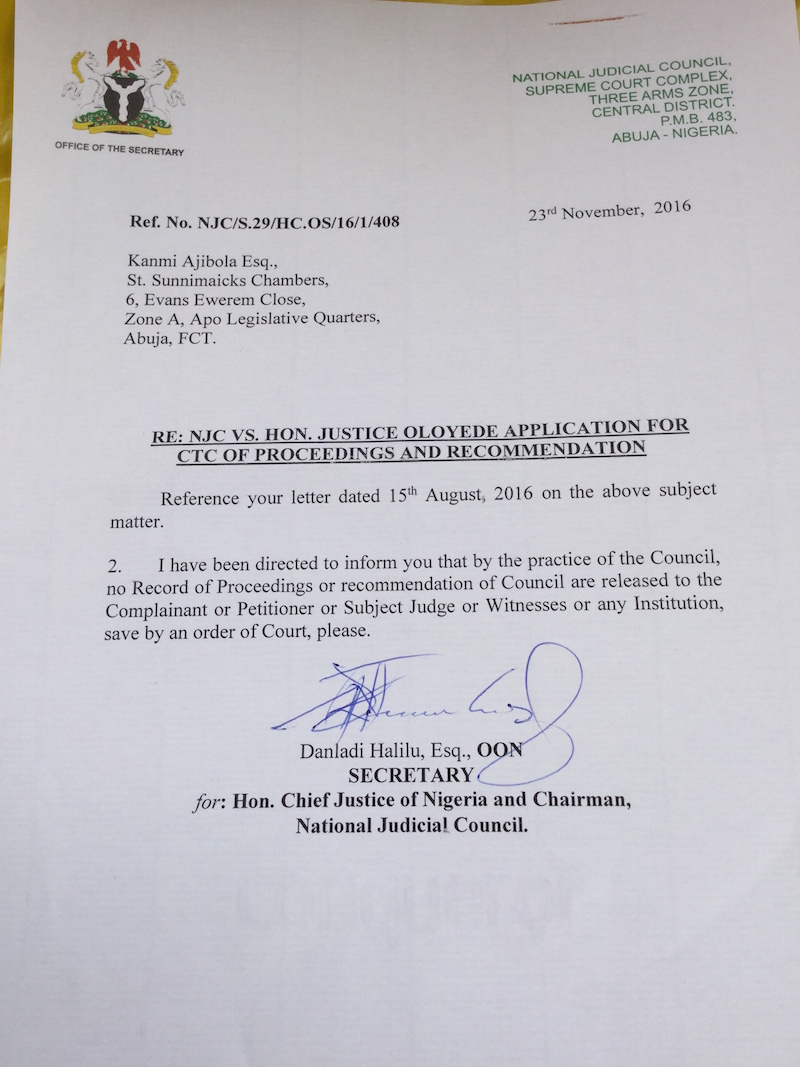