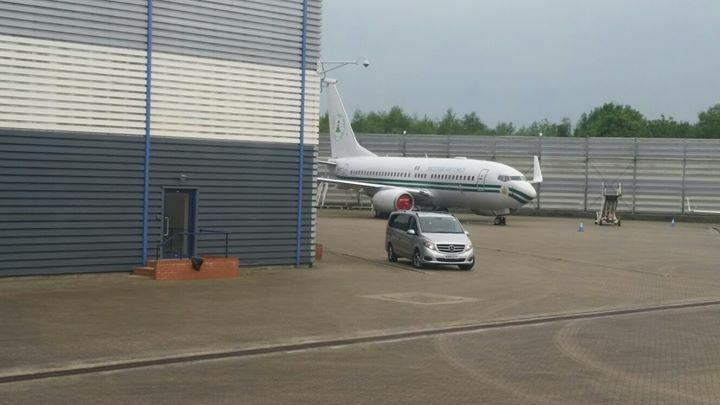 Muhammadu Buhari’s inexplicably frenzied globetrotting at a time when his government proclaimed a new policy that reduced the frequency and duration of foreign travels by ministers reputedly as a “cost-saving measure” recalls my September 16, 2017 column where I wondered if Buhari’s wanderlust is actuated by his resentment of Nigeria itself. I’ve reproduced a slightly reworked version of the column here:

Muhammadu Buhari is held prisoner by what appears to be an obsessive-compulsive impulse to desert Nigeria when the going gets tough. On at least two occasions, he has publicly confessed to feeling the urge to abandon his job in midstream.

The first time he gave public expression to this runawayist emotion was in November 2016 when he addressed senior management staff members and “Senior Executive Course 38” graduates of the National Institute for Policy and Strategic Studies who paid him a visit at the Presidential Villa. “Actually, I felt like absconding because 27 out of 36 states in Nigeria cannot pay salaries and we know they have no other source than to depend on salaries to pay rent and do other things,” he said.

He expressed another urge for runawayism when he met with traditional rulers in the Presidential Villa on September 11, 2017. “We are lucky this year that last year and this year the rainy season is good,” he said. “If it were not good, I must confide in you that I was considering which country to run to. But God answered the prayers of many Nigerians.”

Buhari might very well have been joking. But it is also true that human beings ventilate uncomfortable truths through humor. In fact, an English proverb says, “Many a true word is spoken in jest.” So it’s fair game to interrogate Buhari’s predilection for wanting to abandon the nation in moments of strife and uncertainty.

This is particularly troubling seeing that Buhari appears to be more comfortable outside Nigeria than he is inside it. This is a man who will leave Nigeria for anywhere at the drop of a hat. He spent most of 2015 and 2016 traveling the world (for no justifiable reason, in retrospect) and a good bit of this year on “medical vacation” in London.

So when he said (or, if you will, joked) that he felt like “absconding” after the enormity of the task he was obligated to do stared him in the face, he wasn’t being faithful to the facts. He actually did abscond. How else would anyone characterize failing to appoint ministers six months after being sworn in—and leaving most governing councils of government agencies unfilled more than two years after— while aimlessly traveling the world?

And when he said he was “considering which country to run to” if the rains weren’t forthcoming, he also forgot that he actually did “run to” another country for more than 100 days for a different reason. He went to London to get UK doctors’ second opinion on his already treated ear infection and, thereafter, to treat an undisclosed ailment—exposing Nigeria, in the process, to one of the worst possible international embarrassments any nation could face.

Given Buhari’s penchant for runawayism, it’s hard to tell if his long stays in London were indeed medically warranted or if he was just “absconding” or choosing to “run to” other people’s country because he couldn’t take the heat of governing, which, in any case, he has illegally entrusted to Abba Kyari.

Plus, his health has now become an effective national emotional blackmail tool: he “absconds” for days on end without communication with the people he is supposed to be ruling, allows morbidly ill-natured rumors about him to fester, then causes photos of him to be posted on social media, which inflames more ghoulish speculations, and then a stream of extortionately costly but pointless visits by government officials to London ensues, and, of course, the nation is whipped into a frenzy of prayers for his convalescence.
When he returns, poor, mentally low-wattage citizens, who are the victims of his government by “abscondment,” gyrate wildly in futile, impotent exultation. This melodrama anesthetizes the citizens and helps to conceal or excuse the man’s incompetence for a while, and life goes on.

This is particularly interesting because more than three decades ago, Buhari famously said, “This generation and indeed future generations of Nigerians have no other country they can call their own. We must stay here and salvage it together.”

Apparently, he never believed a word of what he said because in February 2016, Buhari told Nigerians in the UK that he had been using his UK doctors “since 1978 when I was in Petroleum” [i.e., when he was Petroleum Minister. His daughter also recently told BBC Hausa that she doesn’t speak fluent Hausa because she lived mostly abroad “with white people” when she was growing up.]

You can’t “stay and salvage” your country, especially as a high-ranking government official or a president, by perpetually disdaining your “country’s best hospital for medical care in Britain,” as the Los Angeles Times of February 20, 2017 said of Buhari, perpetually vacationing abroad, and sending all your children to school in the UK.

Given what we now know of Buhari, it’s evident that his 1980s patriotic proclamation was just hollow sloganeering. Recall that on April 27, 2016, he also said, “While this administration will not deny anyone of his or her fundamental human rights, we will certainly not encourage expending Nigerian hard earned resources on any government official seeking medical care abroad, when such can be handled in Nigeria.”

Less than one month after this “patriotic” declaration, Buhari went to London, not to treat his ear infection (because, according to a news release signed by Femi Adesina, it had already been “treated” in Nigeria), but to have UK doctors examine his already “treated” ear “purely out of precaution.” Can you beat that quantum of hypocrisy and insensitivity?
What does it say about Buhari’s interest in, and preparedness for, leading Nigeria that he loves to make glib remarks about wanting to run away from the country he actively sought to rule four times in a row? What sort of leader tells (or jokes to) his followers that he almost ran away—and actually does run away— when the country he is mandated to rule gets hot?

Buhari won election in 2015 precisely because the country was in a terrible shape and people thought he truly meant it when he said he would turn things around if he was given the chance to rule again. If the country wasn’t as bad as it was in 2015, he wouldn’t have had a snowball’s chance in hell of defeating an incumbent. That was why he lost against Obasanjo in 2003, against the late Yar’adua in 2007, and against Jonathan in 2011.

To have expected that he wouldn’t contend with the depth of the rot he interminably whines about betrays a sad, embarrassing, and disquieting naivety that shows that he wasn’t worthy of his 2015 mandate. And that’s why he lost reelection in 2019 but rigged the process before, during, and after the fact to illegitimately hang on to power.

Does Buhari, perhaps, imagine that the presidency is some sort of a retirement gift to him? Or that he is doing the nation a favor by agreeing to be a “president”—a weak, bumbling, divisive, ineffective, and hypocritical “president”?