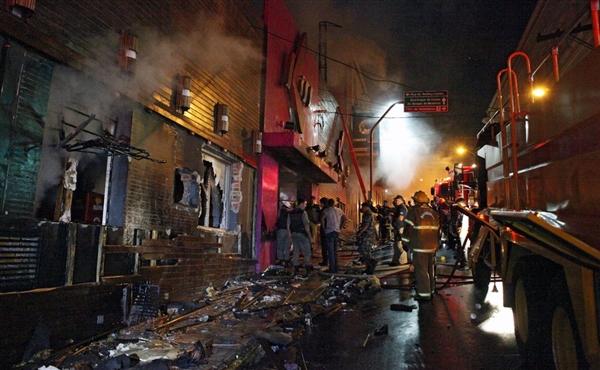 Santa Maria, Brazil (CNN) — Guitarist Rodrigo Martin was preparing to launch into the sixth song of his band’s set when he saw embers fall.

The acoustic foam insulation on the ceiling of the KISS nightclub in the southern Brazilian city of Santa Maria was on fire, and it was beginning to spread.

The hot ash fell onto the stage and dance floor.

In front of him, a sea of people who moments earlier were dancing and singing along to the country-pop sounds of his band Gurizada Fandangueira began to realize something was wrong.

Suddenly, concert-goers were stampeding toward the club’s only exit, pushing and shoving each other trying to get out.

Then, according to investigators and witnesses, somebody fell in the narrow, dark hallway that led to the windowless exit.

And then another person fell.

It was the last weekend of Brazil’s summer break for many of the students, and the KISS nightclub was packed early Sunday with young people — many of whom attended one of a number of universities and colleges in Santa Maria.

At least 231 people died and hundreds more were injured in the fire that authorities believe began about 2:30 a.m. Sunday when the band’s pyrotechnic show ignited insulation material.

Many apparently died from smoke inhalation. Others were trampled in the rush for the exits.

Of the dead, 101 were students at the Federal University of Santa Maria.

About 2,000 people were inside the club when the fire broke out — double the maximum capacity of 1,000, said Guido de Melo, a state fire official.

Editor note: Nightclubs have been said to be the events of the most deadly indoor fire hazards in modern times.