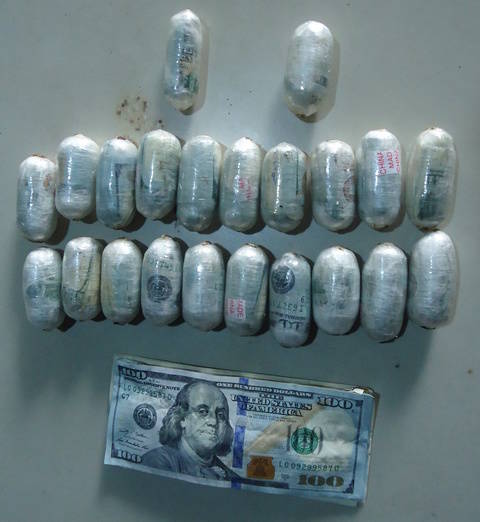 An attempt by a passenger to smuggle 23 wraps containing $US34,000 has been foiled by the National Drug Law Enforcement Agency (NDLEA), the agency’s Head of Public Affairs, Ofoyeju Mitchell, said in a press statement.

The suspect, Ozoh Ikenna, was arrested at the Murtala Mohammed International Airport (MMIA) Lagos, on his way to Brazil. The money was detected during the screening of passengers for an Etihad Airways flight to Abu Dhabi packed in wraps and concealed in his boxer shorts.

NDLEA airport commander, Ahmadu Garba said that the arrest was facilitated by a scanning machine. “We also conducted a follow-up operation where one Ogbo Emmanuel who gave Ozoh the $34,000 dollars was arrested,” he stated.

Investigation by the Assets and Financial Investigation Directorate headed by Mrs Victoria Egbase revealed that the suspects were involved in the laundering of substantial amounts of illicit drug proceeds.

“We were able to trace over two hundred and twenty-six million Naira (N226,000,000) to one bank account belonging to the second suspect, Ogbo Emmanuel,” she said.  “The account name is Eternal God International Limited”.

Ogbo Emmanuel hails from Umunya in Oyi Local Government Area of Anambra State. After his primary and secondary education, he travelled to Onitsha to learn the automobile parts business. In 1996, he relocated to Lagos. In 2005, he left Nigeria for Gambia in search of greener pastures. While in Gambia, he travelled to Germany twice to purchase fairly used electronics. He returned to Lagos in 2008 and has been dealing in cosmetic business at the Trade Fair Complex.

In his statement, Ozoh said that he was only a courier. “I [have lived] in Brazil since 2008,” he stated.  “I was paid to smuggle the $34,000 to Brazil. They promised to pay me five per cent. I agreed to smuggle the money to alleviate my financial hardship. I could not swallow the wraps so I decided to hide it in my underpants.”

It was also discovered that suspected drug proceeds were regularly deposited in the said bank account by members of an international drug cell that smuggles cocaine from South America to West Africa. Investigations also revealed that the cosmetic business of Ogbo Emmanuel at the Trade Fair Complex Lagos was a mere hoax, as his sales records did not justify the large inflow of money into his bank account. A  Hyundai Tucson Jeep was seized as an exhibit during the raid operation.

The Chairman/Chief Executive of the NDLEA, Ahmadu Giade, said that the agency was strategically targeting criminal wealth.

“Asset forfeiture is one of the effective ways of responding to organised crime threats,” he stated.  “We are working assiduously to trace and confiscate criminal wealth of drug syndicates. Strategic efforts are on-going to prevent the entry of drug proceeds into legitimate economy and criminal financing.”

The NDLEA boss assured members of the public that in view of the overwhelming evidence linking the money to narcotics, the agency will diligently prosecute the suspects. Effort is also being made to apprehend other members of the drug cell.