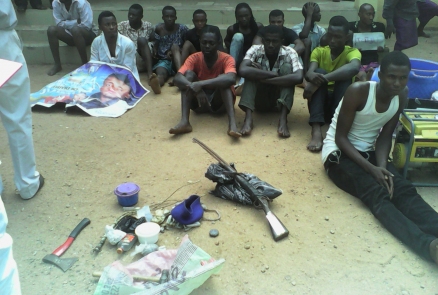 The Ondo State Command of the Nigeria Police Force (NPF) today paraded the Pastor-In-Charge of Believers Prayer Ministry (BPM), Pastor Okpara Chigozie for complicity in the abduction of a two-year old baby in the state capital Akure.

The 25 year-old Pastor was arrested by Police detectives along with his accomplice, Chinnoye Anufor at his church premises after the family of the kidnapped baby reported the case.

A police source told Sahara Reporters that Pastor Chigozie and Mr. Anufor were arrested on the 18th of March with eight other persons, including a female who police say is still undergoing investigative scrutiny. The source revealed that the mother of the abducted baby reported the case to the police at Okuta -Elerinla Division in Akure upon which they immediately swung into action.

Items recovered from the suspects include a pair of sneakers and socks belonging to the kidnapped girl and about 15 SIM Cards with eight assorted phones.

Pastor Chigozie has however denied any involvement in the case. He said he was unaware what the motive of the group of boys he accompanied to the location where the child was abducted was.

He said the boys had consulted him as a pastor to pray for them and he followed them to Akure to mediate on their behalf with the family of a lady which one of the accomplices had impregnated.

“What actually happened was that one of the boys told me that he impregnated a lady and that he wanted me because I am a pastor to accompany them down to Ondo State to settle a dispute between him and the family of the lady so he could be allowed to take the child”, he said.

“I did not know that they wanted to kidnap the child, but when we arrived at Akure and where they were going I only stayed inside the vehicle and they went in and took the child”, he added.

Pastor Chigozie claimed that he only found out later what was happening when one of the accomplices brought out a gun and announced that the child was being kidnapped and anybody who did not co-operate would be shot.

He admitted not conferring with the mother of the girl or attempting to carry out his proposed mediation mission but blamed that on the fact that he realized along the line that the boys whom he was well acquainted with had a sinister motive.

The new State Commissioner Isaac Chinoyerem Eke however confirmed that the kidnappers demanded N50 million from the family of the child and were making frantic negotiations before police picked them up from their hide out.

The accomplices were paraded with thirty-one other suspects. Among those paraded was a 28-year-old student of the Niger-Delta University (NDU), Gisaskpo Makpo, who was picked up by the police for allegedly conspiring with others at large to kidnap a student of Lead City University (name withheld) at Ajagba as well as a group of 7 suspects believed to be members of the Eye confraternity who are allegedly involved in the murder of one Sunday Eniola at Tipper Garage area of Akure. A search on them produced charms, amulets and other paraphernalia associated with cult groups.

In another development, an arms factory along Oba Ile road in Akure was raided by police. The factory was said to have been producing ammunitions but police say further investigation are still ongoing.

Pastor Chigozie, his accomplices and the other suspects paraded will all be charged to court as soon as investigations are concluded.

Commissioner Eke assured locals that his administration will not tolerate any criminal acts in the state. He further sought more collaboration from the public and other security agencies.