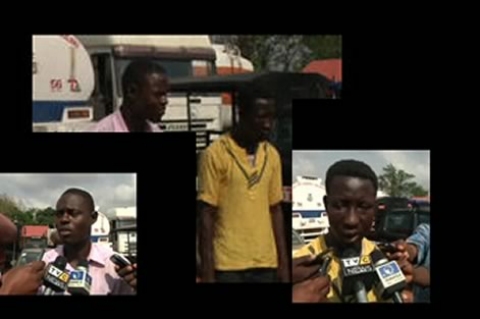 Nigeria Security and Civil Defence Corps (NSCDC) have arrested two members of a gang of suspected serial rapists. The two men are allegedly to have raped a young girl.

At the NSCDC headquarters in Akure, the Command’s Public Relations Officer, Kayode Balogun said the rape happened in Oluwatuyi quarters in Akure and told reporters, “We got a tip off and the two guys were arrested while the remaining four are still at large. They gave us a confessional statement on how the young lady was raped, and they threatened her not to tell anyone what transpired. Because of that fear she did not tell anyone.”

Balogun said items found in the possession of the suspects include butcher’s knives and a small axe.

One of them, Wale Fadahunsi, 28, told police he sex with the girl but did not force her. He had asked the girl out several time but she refused. A high school drop-out, Fadahunsi is now a fashion designer. He admitted to being a member of the cult group.

“On that day, I went to go and meet someone to give them fashion work when I met her in the house. My friends advise me to seize the opportunity to have sex with her since I asked her out and she is proving stubborn. So, I did it willingly and did not force her”

The second suspect, Banji Olaseinde, 25, known as ‘Obanje Babalawo Sherry’ said he is also a high school drop-out and belongs to the cult group, Blue Angel. He said, “We were many that raped her and we have asked her many times to join our group.”

The victim said she was on her way back from school when she was accosted and taken inside the house and gang-raped. She said the six boys took turns, forced her to smoke cigarettes, drink alcohol, cut a section of her finger and licked her blood as a way of initiating her into the gang.

“I saw those guys. I wanted to run and they told me not to run. One of the guy held my hand and took me inside and forced me. He said I should come and join their cult group but I refused and they held my cloth and took met on the bed and three of them took their turns while they also video me”.

She said after they had raped her, she begged the guys to let her leave but they refused and took her to another nearby house, they threatened to send the video to everyone in the street, including her school. At the second house three guys raped her again.

Adeyemi-Tuki said, “We cannot continue to fold our arms and watch our women and girls being raped by these ugly ones in our society. We are not happy over these reoccurring and sad incidents. Parents should be watchful and look after their children, and school administrators should be vigilant about their pupils”.

She also asked the prosecutor of rape cases to redouble their effort and ensure no one found guilty is allowed to go free without been punished in accordance with the law.

This latest rape case comes a week after Ganiyu Kolawole, 71, was charged in court with the alleged rape of Taye Juliana, 7, at Oba Ile in Akure, first reported by Sahara Reporters on December 6th.