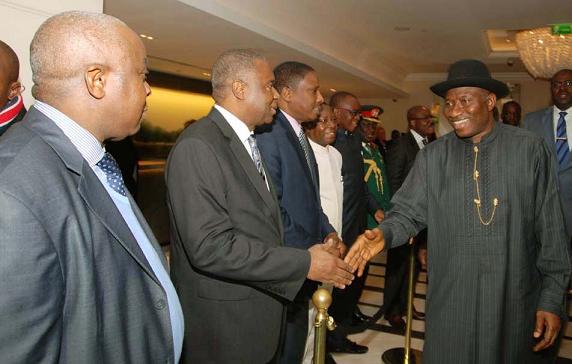 Christmas is not the only reason why many people in Spain look forward to the end of the year. Another reason is that annually, thousands win huge sums of money from El Gordo, meaning the ‘The Fat One’ in Spanish. It is one of the largest prizes in lottery. As the day of the draw approaches, a lottery fever grips Spain and millions of people join lengthy lines to buy lottery tickets for a chance to win a share of The Fat One. In 2012, the equivalent of about N500 billion was shared among winners.

In Nigeria, El Gordo also takes place, except that participation is not open to the public, but restricted to a select few; top politicians, serving and retired military officers, traditional rulers and other elite. It has no fixed time, but comes up as politically expedient. The funds are not voluntarily contributed by the public through the purchase of tickets, but taken out of state coffers.

Nigeria’s next ‘Fat One’ will be in 2015 – with a prize of at least US $2billion. Not surprisingly, this has already triggered huge levels of excitement.

It was Niger state governor Babangida Aliyu, during his political brawl with Jonathan and the PDP (in what is no more than the first salvo in the early skirmishes in the battle for 2015), who taunted President Goodluck Jonathan by revealing that he knew of the existence of a list of 400 Northerners that had been penciled on a ‘fat list’ to be ‘persuaded’ to look the other way when the president’s electoral machinery overrides the region and retains power in 2015.

Even to Nigerians, who probably have the toughest shock absorbers in the world, it must have sounded like a below-the-belt attack on the president. However, the list not only exists, but has been used by successive administrations to bribe, cajole, appease, or all of those failing, threaten people to conform.

Governor Aliyu might have added an extra zero, but a list of 40 prominent Northerners actually exists. Each is to be given US $5 million to buy their silence and therefore complicity, in whatever the president, his party and INEC do to remain in power.

Listing prominent Nigerians on a ‘fat list’ has always been an instrument of government. It may be in form of a political appointment, oil block, humungous contract, fuel import license or raw cash – preferably in American dollars. The list often includes well-known politicians, traditional rulers, generals, religious and community leaders, rabble rousers and even ‘militants’.

For some, having their names on the list of ‘fat ones’ has become a do-or-die affair; others have exceptionally mastered the art of belonging to the list – by falling over themselves to reveal secret meetings or issues affecting the president, or fabricating evidence of conspiracy against government. In return, their names are a certainty all lists, allowing them to sustain expensive lifestyles with their eye, ear sand lip service to any government in power. The rewards can be very fat.

The last ten years have seen many ‘fat’ lists: Olusegun Obasanjo oiled the machinery of his re-election in 2003 with a ‘fat list’ containing the names of prominent people across Nigeria who got a slice of the action. Many of the same Northerners now shouting to high heavens against Jonathan were on that list and smiled to the banks as they outdid themselves to deliver the region to Obasanjo.

Later that year, the organizers of the 8th All Africa Games also had a list of ‘fat ones’. Anyone with a connection to government – real or assumed – got contracts, as did their wives and relatives, in addition to traditional rulers and other influential people. In the end, Nigeria staged one of the most expensive and scandalously corrupt spectacles in sports history, but no one has had the courage to probe what happened. The list was too fat.

When Obasanjo attempted to change the Constitution to run for a third term, another list of ‘fat ones’ also came out. Though very well funded, the bid failed because Obasanjo’s ambition was a bridge too far. However, as the elections of 2007 approached, all politicians that had an eye on the presidency also drew up their own list of ‘fat ones’. Peter Odili’s ‘fat list’ was so fat that people talk about it till this day.

Sadly, because of the near total erosion of moral and ethical values in Nigeria today, having one’s name on any list of ‘fat ones’, no matter how greasy or odious, is a thing of pride and a badge of honour, or evidence of one’s importance and power. Just look at how ‘fat’ the names on the Halliburton, Siemens, fuel subsidy scam and the Malabu oil scandals are.

In essence, Nigeria is not broke, but running a government by lottery where the treasury is a permanent El Gordo for the elite – Northern or Southern – who make the list.