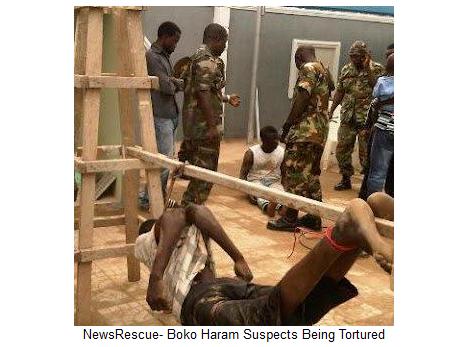 NewsRescue- It is necessary to constructively discuss the Nigerian government’s failure in tackling the Boko Haram insurgency in the country’s North Eastern extremes.

To appreciate the problems and the fact that the Nigerian government is deliberately or due to lack of wherewithal, not addressing them, we will try to give a brief intelligence description of the peculiarity of the problem and the worrisome method of government address, as well as proffer urgent solutions.

Several Nigerian figures have attacked the president of Nigeria, but very few alternative solutions have been put forth by anyone. Inflammatory statements have been carelessly made that could lead the country down the unnecessary path of sectarian strife.

What is the strategic objective of the president of Nigeria in combating terrorism?
Hope is not a strategy.

As challenging as the Boko Haram crisis is in Nigeria, it could present a unique opportunity for over arching nation building, and development of its security institutions. Indeed it should. Post 911 the United States has developed security advancement that not only protect the nation but are marketable. Nigeria is yet to make any notable progress beyond responding to the day-to-day tactical problems posed by Boko Haram.

To appreciate the situation and the necessary aspects of dealing with a conflict of this nature, it is essential to understand the tactical and operational different forms of Boko Haram, and recognize how to appropriately recognize and deal with each:

Terrorists – These are a hidden group of connected individuals, who operate infrequently with primary objective – triggering maximal causality linked fear by aiming at peoples sensibilities and sensitivities. These could be economic centers, like the World Trade Center, Safety, Religious sanctuaries and the like. Boko Haram in its earlier days operated more as terrorists, but today, they have metamorphosed into other compartments due to a failure of their terrorism sparking the desired response of triggering sectarian strife. Their attacks at Churches only led to a unified response from Muslims and Christians in North Nigeria and greater cooperation from both parties. At this turn in events, the fanatical terrorist brand of Boko Haram waned out as it was obvious that they could not gain needed local support and finance to sustain their venture and successfully trigger religio-ethnic wars. Several of their political sponsors also got arrested and Boko had to realign.

Insurgency – An insurgency is an armed rebellion against a constituted authority. Boko Haram has fluttered in and out of being an insurgency. Being an insurgency will mean a dedicated cause to upset the Nigerian government without being organized enough to have defined principles. Boko Haram appears particularly disinterested in upsetting the government. Rather on may occasions they have impressed on the public their respect for the government of Nigeria. On a particular occasion, Boko Haram went as far as bombing media houses for disseminating what they called, a false message of their intent to attack the president. Boko Haram were happy to see the Mali crises and in that event, their rapid response against the international effort was clear and defined. They attacked Nigerian military buses and kidnapped French hostages. These actions show a global mission, primary foreign alliance, foreign role and mission as compared to a Nigerian directed insurgent mission. Boko appears highly capital driven and chaos loving more than any other association.

Rebel group – As Boko Haram progressively undergoes metamorphosis, the group is feeling more comfortable operating as a non-specific, for-hire, and cash motivated rebellious group. Similar to the rebel groups of Central Africa. Boko Haram is seeing non specific rebellion as a means of employment and maintenance. But to operate as a rebel group as against operating as terrorists, the group requires greater roaming area and camping territory and a defined focus. This rebel force operates primarily from Nigeria’s borders and neighboring countries, leading incursions into Nigeria to attack and then retreat. Boko Haram fits the profile of aspiring rebels who lack the belligerence to fulfill the criteria to be defined as true rebels.

The lack of clarity of Boko Haram’s definition probably explains the refusal of the United States classifying Boko Haram as terrorists or a rebellion. Having to revise classifications as occurred with Mandela’s ANC youth wing gives an understanding of United States’ hesitations these days. An opening for Blackmail – The Western world reserves the right to in the future classify Boko Haram as a worthwhile rebellion to be armed and defended against Nigeria. The world is basically waiting for Boko Haram to decide what space it wishes to occupy, either deciding to become rebels, insurgents or only terrorists. Boko Haram lacks the organization and character to settle for a position because this quickly subjects them to typical methods used to handle each of these groups. We however believe Boko Haram needs to be dealt with as aspiring rebels, seeking maturation via religious and political association.

How is Nigeria reading and dealing with this threat?

Nigeria is still dealing with Boko Haram purely as a terrorist threat. In dealing with a terrorist threat, telephone communications, networks and sponsors will be aggressively pursued. The Nigerian security forces work as a counter-terrorism operation against what has turned into a potential rebel war. Security is gathered from captured operatives to access and capture middle class Boko Haram members. The top sponsors of the Boko Haram project live in immunity in Nigeria and the aspiring rebel forces are also left to operate with impunity.

When we look at the recent happenings in Borno, we see raids, typical of rebels. The murder of General Shuwa, the capture of French citizens, the kidnapping of Ali Shetimma Mongonu, the invasion of Baga and the beheading of two Islamic clerics in Ngamdu, border town between Borno and Yobe States this May have been conducted in rebel-like formation, with dashes into the community and assassinations or carting away of hostages back into hide-outs, usually across the borders.

When we examine the occurrence in Baga, we see a situation where rebel invaders enter a town and the Nigerian Joint Task Force (JTF) wage a conventional war against a handful of rebels in a populated city. Such an operation does not take into consideration the type of enemy they are engaging against and the battle field. Civilian and property causalities were numerous as we were all aware. The result was at best 25 terrorist deaths with hundreds of civilian lives lost. Boko Haram subsequently moved to another town in Adamawa state to prompt a likewise decimation of the civilian population. Reportedly they moved in several Hilux buses.

DailyTrust, 20 April 2013- Many local governments areas in northern Borno and other parts of the state are gradually coming under the control of members of the Jama’atu Ahlis Sunnah Lid Da’awati Wal Jihad, also known as Boko Haram, Weekly Trust heard yesterday.

Weekly Trust also learnt that in Marte Local Government, the sect members control most villages and openly organize public preaching in village market in Krenuwa, the hometown of the current Secretary to the State Government Ambassador Baba Ahmed Jidda, who is a member of the Presidential Amnesty Committee. …

It was also learnt that the sect members are acquiring so many vehicles, in military colours and mounting guns on them. Three brand new hilux vans belonging to the Chad Basin were also reportedly snatched by gunmen. Read more…

The current government approach fails to secure life in the North east, but reacts in a counter threat approach that systematically depletes the population. Unreported by the media is the mass exodus of the indigenous North eastern population. Borno state is like a ghost state. Nigerians have emigrated to Chad, Niger and neighboring nations, as well as south within Nigeria, out of the troubled zones.

Not unusually for a Nigeria abound with distrust, certain security agents are of the belief that the security services sets up appointments with Boko Haram on the next village or city to jointly decimate.

So long as Nigeria continues tackling this rebellious cross-border and inter-state war with a reactionary approach, we can predict a decimation of the north eastern population and a progressive Boko Haram take-over of that region of the North with far reaching consequences for the entire country.

What Nigeria should do

Without question, the entire Nigerians security apparatus needs complete overhaul. Our armed forces needs urgent training in combat. Chadian forces are better trained than Nigeria’s military as has been noticed with their operations under the UN in Mali. In line of this, we recommend an agreement with Chad due to proximity, proven experience and a cultural understanding of the region, to assist in combating the terrorist threat.

An amnesty is out of the question for attackers who are 90% foreign, linked to unknown foreign interests and sponsors and based with their training camps primarily outside Nigeria’s borders.

The military have no role operating within cities. Nigeria’s military lacks the training for such combat and have proven incapable of such endeavor. The Baga crises with thousands of houses burned has been linked to the armed forces using “tracer” bullets, which light their paths and set their targets on fire. These are tools for battle-ground wars and not inter-city engagement.

For peculiar reasons, Nigeria’s government is seemingly taking advantage of the insecurity to perpetrate a “crushing response,” resulting in alienation of the locals, crippling of the economy and systematic depletion of the population.

Border patrol must be seriously addressed by joint Nigeria-Cameroon and Nigerien forces and cooperation. The border is where our military should be fully engaged. NewsRescue‘s April 12th article details the Boko Haram threat from Nigeria’s porous borders.

Nigeria must mobilize air defenses. These include copters and drones, surveillance drones. The cost for these necessary updates to anti- terror equipment is not out of reach. The ScanEagle surveillance drone for instance is relatively cheap, just $100,000 per unit. Nigeria should immediately purchase several low cost drones and operate these in the region, backed up by a swift military force and air assailant setup. Boko Haram must be swiftly decimated by a full force comprehensive security operation. The current approach converts what can be crushed with proper investment and approach into a prolonged, intractable limitless catastrophe.

Citizens are not being protected in the North east. There must be urgent update in policing in the region. Mobile police units must be drafted to the North East for increased stop and search and rapid response in the event of terror. Till Boko Haram is contained, we must have a police presence in this region of at least 1 security man to every 100 citizens. What obtains now is less than 100 police per 100,000. Filing this gap can be via properly trained and equipped armed civilian vigilantes.

Boko Haram should serve as an opportunity for security advancement in Nigeria, which goes beyond terrorism and will setup Nigeria to now be capable to solve murders and other security crisis we have been inept at.

Perhaps Nigeria is too large for the government to control and secure. If the government can not secure the North eastern region, it needs to clear out its citizens and give-up the regions as “lost to the rebellious forces.”

We expect the Jonathan administration to step up to the plate and act properly and seriously to secure the country’s citizens.