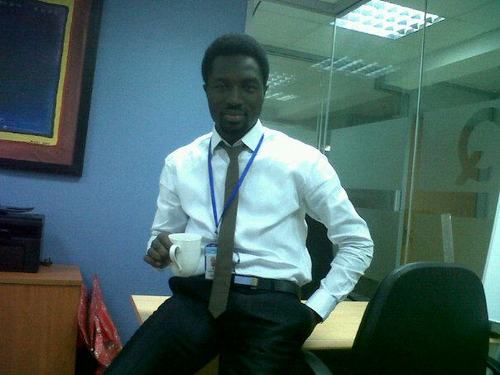 On Monday April 29th, police said an unidentified man jumped from the rooftop restaurant of The Nines Hotel at 525 S.W. Morrison St, downtown Portland, USA. The man who jumped and died has been identified by the Multnomah County Medical’s Examiner’s Office as 34 year old Yinka Olonode.

Portland Police Bureau spokesman said Yinka jumped from the hotel building’s 15th floor around 6:30pm that Monday evening. He said they do not suspect foul play but that the death is under investigation. If Yinka indeed committed suicide, nobody knows why he did it.

Yinka was a model back in the day and worked briefly for Rhythm FM before relocating to the US in 2003. Continue to see the popular MTN ‘Shy Guy’ TV commercial he featured in over 11 years ago.

Yinka is the guy with colored hair who tried to hook his friend up with the girl. May his soul rest in peace…Amen -LindaIkeji