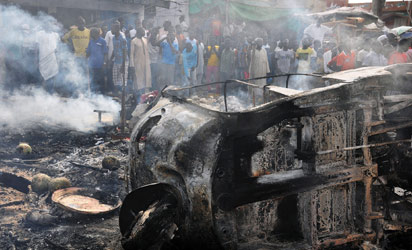 NO fewer than 15 passengers including motorists were killed when some gunmen suspected to be members of dreaded Boko Haram terrorists laid ambush along Maiduguri -Mafa- Dikwa Road yesterday at about 2:30pm.

Mafa is about 45 kilometres  East, while Dikwa is about 70 kilometres drive from Maiduguri that had suffered series of deadly attacks by terrorists in recent times.

The attack on passengers and motorists on this road is the latest even as the Maiduguri- Damboa -Biu, and Maiduguri- Bama -Gwoza roads have remained a death trap with no security effort to stop the carnage as most people have abandoned these roads for fear of being killed by terrorists who have so far taken over most of the villages along the main road linking the state capital.

Sources said, the gunmen who wore military camouflag uniforms disguised as soldiers on the main road, and intercepted three vehicles with two heading towards Dikwa, while the other was from Gamboru Ngala, a border town with Cameroon Republic before opening fire on the occupants killing over 15 of them with the injuring of 7 others.

A reliable security source told our Correspondent that “information available to us this evening indicated that the Maiduguri – Dikwa road is not safe as terrorists laid ambush on passengers and motorists killing over 15 of them at about 2:30pm , some of our men have been mobilised to the scene, but unfortunately, they only met those killed and the injured in the pool of their blood as the attackers have fled into the surrounding bushes after the carnage”. He said.

Two suicide bombers suspected to be member of dreaded Boko Haram sect in a golf saloon Volkswagen car laden with Improvised Explosive Device, IEDs rammed into a security checkpoints in Konduga Local Government Area of Borno state killing 5 members of vigilante youth popularly known as civilian JTF, while the two suicide bombers also lost their lives with many of the vigilante youth and passersby sustained serious injuries and fire burns.

Just last Tuesday, a suicide bomber struck in Monday Market in Maiduguri killing 16 members of Civilian JTF,  over 40 innocent civilians with destruction of property worth millions of naira.

Our Correspondent gathered from reliable sources that the incident took place at about 1:39pm on Friday when Muslim faithfuls were on their way to the Mosque for Juma’at prayers.

Konduga is about 40 kilometres drive from Maiduguri Metropolis which had witnessed series of deadly attacks with the killing of over 50 worshippers in a Mosque during  Asba/ morning Prayers.

Sources said the two suicide bombers outsmarted the military operatives at their checkpoint when they were intercepted, but pleaded with the soldiers on duty to allow them go without been searched as they were already late for the Jumaat prayers.

The sources said as soon as their plea was granted by the soldiers they freely allowed pass, and when they approached another checkpoint of the Civilian JTF just few metres away from the Military post, they detonated the explosives killing five of the vigilante youth including the suicide bombers.

Our Correspondent gathered that the remains or mangled bodies of the civilian JTF members died in the blast have since been buried according to Islamic rite in Konduga, while the injured were rushed to undisclosed hospital in Maiduguri where medical personnel were battling on how to save their lives.

A member of House of Assembly Representing Konduga and now the newly elected State Chairman of the ruling All Progressive Congress, APC in Borno, Hon. Ali Dalori was sighted busy by our Correspondent after the Jumaat prayers in Maiduguri arranging security operatives that will accompany him to Konduga to enable him and other goverment  officials attain the burial ceremony of the the deceased who were killed in the blast.

All effort to get the Police Public Relations Officer, DSP Gideon Jubrin for confirmation was not fruitful as his phone line was switched off at press time.