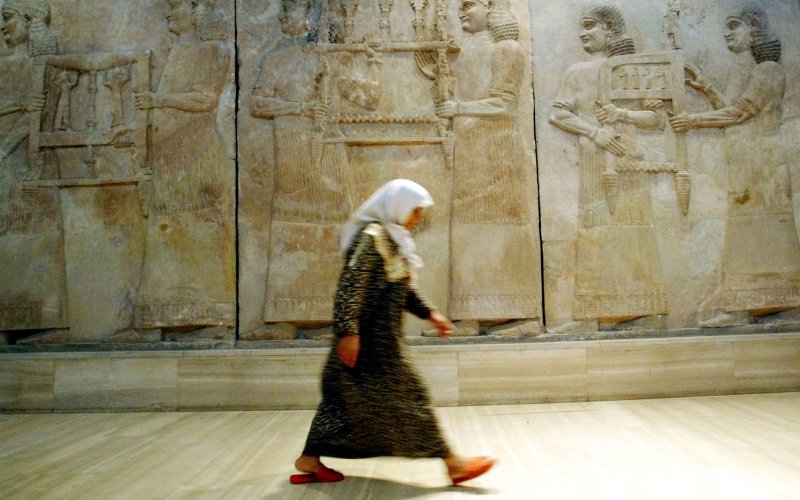 Iraqi antiquities officials are calling on the Obama administration to save Nineveh and other sites around jihadist-occupied Mosul. But are drone strikes really the answer?
PARIS — More than two and a half millennia ago, the Assyrian King Senaccherib descended on his enemies “like the wolf on the fold,” as the Bible tells us—and asLord Byron wrote in cantering cadences memorized by countless Victorian schoolchildren: “His cohorts were gleaming in purple and gold; And the sheen of their spears was like stars on the sea.”The Assyrian and Babylonian empires appear throughout the Old Testament as examples of ruthless grandeur and godless decadence. The Bible says Sennacherib’s army was destroyed by the Angel of the Lord. The Israelites were carried off to Babylon, where they wept by the waters. And since the middle of the 19th century, archeologists have labored mightily to unearth the mythical and the verifiable past in the extraordinary cradle of civilizations they used to call Mesopotamia and now call Iraq.

No trace ever has been found of the Garden of Eden, said to have lain near the confluence of the Tigris and Euphrates, but one of the great prizes the excavators did discover was Senaccherib’s capital, Nineveh, which the biblical prophet Nahum called “the city of blood, full of lies, full of plunder, never without victims!”

Last month, a new marauder descended on Nineveh and the nearby city of Mosul. He, too, came down like the wolf on the fold, but his cohorts brandished Kalashnikovs from pickup trucks, not shining spears; their banners were theblack flags of the Islamic State of Iraq and the Sham.