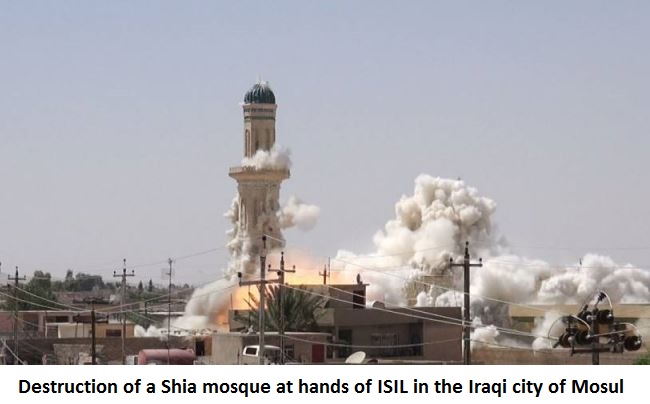 Takfiri militants from the so-called Islamic State of Iraq and the Levant (ISIL) have demolished several holy shrines and mosques belonging to Shia and Sunni Muslims in the militancy-riddled regions of Nineveh Province.

A large number of civilians fleeing Iraq’s northern province of Nineveh say the ISIL terrorists destroyed a number of religious landmarks in the northern cities of Mosul and Tal Afar.

Local residents and witnesses say the militants have occupied two Orthodox cathedrals and replaced crosses with their black flags. They had previously demolished several churches.

All destructions have taken place in and around the volatile region of Mosul.

The ISIL Takfiri militants also issued several statements in recent days calling for the destruction of all religious and historic sites in the country.

Witnesses said the militants destroyed symbols of Iraq’s heritage in the city of Mosul, including statues of cultural icons and the tomb of a medieval philosopher.

The ISIL and its associated militant groups are blamed for numerous sacrilegious acts. The terrorist groups have links with Saudi intelligence and it is believed that they are being indirectly supported by the Israeli regime.

Iraqi Prime Minister Nouri al-Maliki has also blamed Saudi Arabia and Qatar for the security crisis and growing terrorism in his country, denouncing Riyadh as a major supporter of global terrorism.