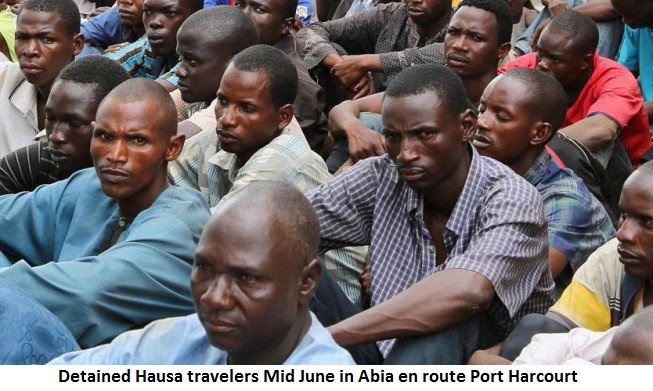 In what some are accusing the Jonathan government of mischievously promoting a wave of persecution and intolerance against northerners in the south, most especially the south east, possibly to instigate religious and ethnic strife in Nigeria, there appears to be increased police action against northern extract citizens in certain areas of Nigeria. A Muslim central organization, MURIC has just called strongly for the release of an Imam, Ustadh Abdul Ganiy Jumah and his wife abducted by state security agents in Ogun state. In the same Aba in the release below, about 500 northern travelers en route Port Harcourt, were arrested and displayed as Boko Haram suspects, in Mid June, evoking strong criticism from northern leaders.

Thirteen Imams/deputies, Others Arrested For Alleged Bombs In The Mosques In Aba, Abia State On Sunday Night About 2:00am

Thirteen Imams/deputies, other members of the Muslim Community in Aba, the Commercial City of Abia State, were in the mid hours (2am) on Sunday 06-07-2014, arrested by soldiers over alleged suspected bombs.

According to the Former Abia State Amirul-haj and Deputy Chairman of the Muslim Community in Aba, Alhaji Musa Iheakaram, the soldiers, who he said, came in seven Hilux Vans stormed the Aba Central Mosque on Hospital Road at about 2:00 am in search of bombs alleged to have been brought into the mosque.

The soldiers, who came from unknown Army Barracks, also raided all Hausa Mosque and quarters, the Onions Market at Uratta, a suburb of Aba, and after searching, they arrested its Chairman and the Secretary, Alhaji Ibrahim Bargi and Alhaji Sanni Jos respectively as well as Alhaji Inuwa Issa, Chairman of Yam Market, Ariaria Junctions.

According to the formal Amirul-haji the soldiers also arrested the Community of the Muslim Community on Ikot Ekpene Road, simply known as Alhaji Issa interstate.

Alhaji Iheakaram’s word: “At about 2:00am, one of my brothers, Alhaji Bala Daura called to inform me about the raid by soldiers from unknown barrack; but before I could rush to the Mosque, the soldiers had taken the Chief Imam, his deputy, Director, principal and a corps member away.

They didn’t end at the Aba Central Mosque. Another information reaching me now is that they equally went to the Onions Market at Uratta market, searched everywhere in the Mosque; they didn’t see any bomb, guns, ammunitions, in any of the Hausa Mosques. They took the phones of our brothers that were in that market at about 3:00 am. After they left Aba Central Mosque and went away with the Chairman of the Onions Market and his Secretary.

“We also learnt that they went to the Yam Market, where they equally searched and were unable to get anything. They however, went away with the Chairman of the Yam Sellers. The Sarki of Ogbor Hill was also picked by the soldiers when they carried out similar operations in that zone.”

Iheakaram alleged that during the raid on the Central Mosque, the soldiers left with some bags containing chemicals used by students of the school within the Mosque for their practical studies.

The Muslim Leader said they were yet to know those arrested and were those arrested taken to, as their members who went to various military formations in the state were not allowed to see anybody.

The unknown soldiers said they were on routine checking of all the Northerner Mosques in Aba. All the Imams/deputy and others has been released on Monday 07-07-2014 by 2:30pm and they identified that the soldiers came from the 144 Battalion Asa High School Aba, Abia State.

The Director, Principal of the New Horizon Academy (NHA), Nursery, Primary and Secondary School at Ama-Hausa Aba, Abia State and a corp member are still with the soldiers at 144 Battalion Asa High School, Aba, Abia State.