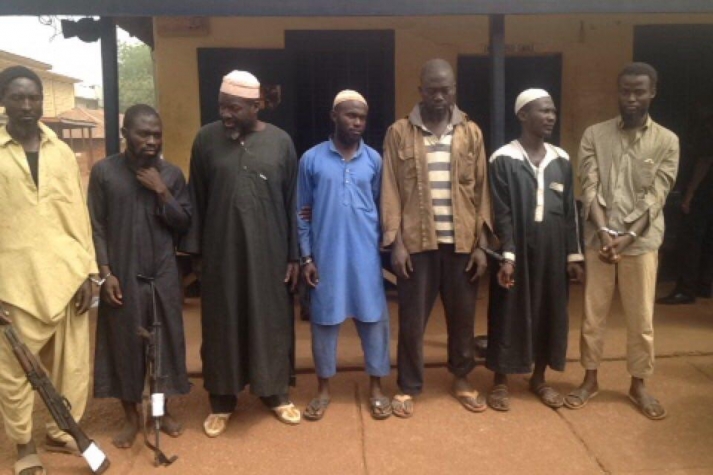 Seven people whom the police arrested with two AK 47 assault rifles in Salaga in the Northern Region of Ghana on December 24, 2015 are suspected to also have links with Islamic group abroad.

Aside from the weapons, a computer and a laptop retrieved from the suspects according to close police sources indicated that the two gadgets were found to contain pictures and materials of training kits of the dreaded Islamic group, Islamic State (ISIS).

The computer and the laptop was also said to be containing pictures of how ISIS decapitated their victims which goes to reinforce the suspicions of the group being in league with the dreaded Islamic group.

According to the police, preliminary investigations indicated that the suspects who lived at Lamashegu, a suburb in the Tamale Metropolis might be involved in recruiting and indoctrinating young people on issues on Islamic extremism.

Two of the seven suspects were earlier arrested at a village called Jantong-Daboase near Salaga on a motorbike with a sack containing two AK 47 assault rifles with no bullets by some residents on December 24, 2015 who sent them to the Chief’s palace at Salaga.

During interrogation at the chief palace, one man by name Ibrahim Iddrisu Wunpini,50years came in to plead with the chief to release the two young men who were arrested with the guns but the chief and his elders quickly called in the police from Tamale to arrest the suspects.

During the intervention of the police at the chief’s palace, four other men came around and when they were questioned about their presence, they could not give any tangible reasons and hence were also arrested.

He said the two young men arrested with the AK 47 rifles have been charged with possessing fire arms without legal authority while the other five suspects have also been charged with conspiracy and would be arraigned on Tuesday, December 29,2015.

ASP Tetteh said during interrogation one of the two young men arrested with the guns said he was asked by the other to go and train him on how to use the rifle.

He gave the names of the two young men arrested earlier with the AK47 rifles as Mohammed Saani Muftaw and Issah Suale.