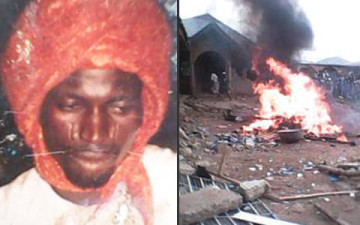 Gani, the house where the placenta was found

After the bizarre incident, sources said human parts were also found in the cleric’s residence.

It took the intervention of policemen who quickly whisked the cleric and his family away to save them from being lynched.

The men of Kwara State Police Command had, penultimate week, paraded three human parts dealers, while the police were still investigating a four-storey building along Airport Road in Ilorin where human parts were also found.

How the suspect was nabbed

The latest discovery was made when the community leaders in Laduba decided to raise some volunteers to go round the houses in the area to ask for contribution for the repair of their faulty transformer.

On getting to the suspect’s house, Vanguard gathered, the volunteers were greeted with offensive odour from the house. Worried, they alerted other members of the community about the odour.

The volunteers, subsequently, mobilised more residents to the house of the islamic cleric, asking him to explain the cause of the odour.

But Alfa Gani was said to have feigned embarrassment, accusing the concerned community members of trying to intrude into his privacy.

Vanguard gathered that the development degenerated to argument between him and members of the community who insisted that they must get to the root of the matter.

The suspect, the source further said, angrily left them in his house to lodge a report at the nearby Oloje police station.

But before his arrival, the residents were said to have forced their way into the house where they met a boy preparing some charms with the baby’s placenta which was the cause of the stench in the first place.

Consequently, the angry mob that had gathered descended on the boy, making him confess that the cleric asked him to exhume the baby’s placenta to prepare the charms.

In the middle of the confusion, the mother of the baby was said to have rushed to the point where the baby’s placenta was buried only to discover that it was no longer there.

While the commotion lasted, Alfa Gani, according to the source, arrived the scene with some policemen with the intention to arrest those trying to “intrude into his privacy” but the community rose against them and presented the true version of the story to the Police.

“It was at that point that the police decided to search the entire house following which they discovered more human parts,” a source said.

The police, it was further gathered, extended their search to an uncompleted building behind the suspect’s house only to discover that the place was being used as a slaughter slab for human parts.

The mob, therefore, demolished the structures and set the suspect’s property on fire.

The presence of the policemen, it was gathered, prevented the mob from carrying out jungle justice on the suspect who was whisked away by the police.

Contacted, the state Police Public Relations Officer, PPRO, Ajayi Okasanmi, confirmed the incident but said it was not a case of human parts selling.

He said a man was caught with baby placenta and the community descended on him.

Okasanmi said the man was just released from prison where he served a term for similar reason, saying: “We are still investigating the case.”