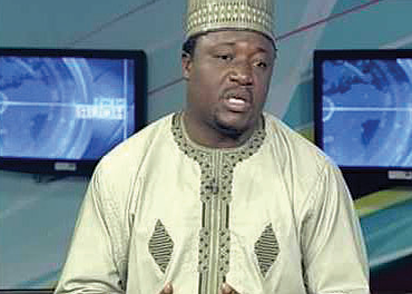 What is your take on the current state of the nation?

I am not really comfortable because it is clear to everybody in the country that the hope of the citizenry has been dashed by this administration. This government enjoyed a lot of support and goodwill from the people who were hoping that things will be better if we could put a new government in place. And that is why they came out en-masse to give the kind of support and mandate the government got in 2015 against then ruling party. And then opposition party won an election the kind that has never happened in the history of this country.

Eventually we had a new government in place but the hope of the people has been dashed. The hope has been destroyed. So, the state of the nation is neither here nor there. The economy is nothing to write home about. A lot of things are not just right. I think this is not what Nigerians bargained for. And so, in essence, a lot of Nigerians are not really happy.

Are you saying you are disappointed in this administration?

I think we are going to bring an alternative in 2019. We have to bring a new order in the country because we cannot afford to have a president who is not in charge of the affairs. This is coupled with the fact that some of us looked at his age ahead of 2015 and came up with the reservation that it was not a good idea to have a man of his age to lead a country like Nigeria with a population of about 200 million people. People thought we were undermining him at that time but we said no because somebody of Buhari’s age would find it difficult managing his personal affairs not to talk of the affairs of a huge country like ours. We have nothing against President Buhari personally but we believe somebody of his age should be home to manage his health.

And age is not even the problem because, when you look at global events, the way things are turning around universally, you will agree with me that we need, in the saddle, somebody who is in tune with the global reality. We need people who are digitalization compliant to turn things around in terms of intellectual capacity, in terms of globalization and people who will be in touch with the current world order. We need somebody that is agile and knowledgeable enough to move round the world with his counterparts. For now in Nigeria, that is not the case. And I don’t think we are making any headway in that direction.

And the worst thing is that, for government to look for capable hands that can turn around things positively, it ended up picking individuals that had been out of circulation for a very long time.

These outdated and spent forces constitute government and they are not doing well. Now, you can see the confusion everywhere. The reality is not all about Buhari as a person. The reality is about nature that is taking its toll on him coupled with the situation of his health that nobody knows. I am afraid we may fall into a constitutional crisis we were plunged into during the Yar’ Adua government. And that would not augur well for us as a country.

Why do you express this fear?

This view is across board. You know, from what we gathered, there are some aggrieved people who find it difficult coming out openly to speak the minds of their people or to express their views on the state of the nation. But some of us who are trained to speak the truth without minding whose ox is gored will always come out to speak. For now, nobody is happy with the situation. It is really sad that those of us from the northern part of the country who thought the coming of Buhari would be a new dawn for us, the down trodden who feel marginalized and thought would be rescued by him, are also disappointed.

The common man in the North, the pepper seller, the sugarcane hawker, the beggar and others, who trooped out to give him the mandate thought he would look round to see a policy that would help their cause, are disappointed. At the end of the day, some of his policies are only on the air! And directly, you cannot feel the impact.

Apart from the recent CBN policies that appear good enough to touch the life of the common man, there is nothing to write home about and the CBN cannot do everything. We need the government to key into the policies and even encourage the apex bank the more to make the policies work better. We are on ground and we could see how things are really, and we are not at all happy. So, definitely, come 2019, we must look for a way out of this mess. We cannot continue like this.

What is the alternative?

We need a vibrant president and one who has intellectual capacity. We are going to look into age and a lot of other things to be sure that whoever comes up in 2019 will not be part of this old establishment.

Do you still nurse the hope that Nigeria can rise again?

On that, I am neither here nor there because unfolding events in Nigeria today give room for concern. Over and over, we have proved to be good in hoping. And every problem of yesterday becomes small compared to what happens today. It has been a case of our yesterday being better than our today. And the problems, rather than decreasing, are regrettably increasing. And if care is not taken, we are going to run into constitutional crisis of an unimaginable proportion and can be worse than the one we encountered during the Yar’Adua regime. The acting president has limitations. And Mr. President, who is our collective property, we don’t know the situation of things with him. No matter how anybody wants to keep his situation under secrecy, it doesn’t work that way because it is our right to know what happens to him. What is being spent to keep him abroad is tax payers’ money. The money belongs to Nigerians. And it is their right to know exactly the state of his health.

One time you hear Lai Mohammed saying one thing. Another time you hear Femi Adesina saying another thing while someone else later is saying a different thing and all of them are working with the same establishment! It gives room for a lot of concern. Our prayer is his safe return. But we have to know what is happening because we cannot fold our arms till we run into another constitutional crisis and start to look for another Doctrine of Necessity.

We, northerners, need to put people in the right places with a view to finding answers to our problems. We need to have a smooth transition to 2019 and then 2023. The North is unstoppable for now and we cannot afford to take any chances.

What steps can be taken to eradicate insurgency?

We can totally eradicate it through the suggestion of the Emir of Kano, Alhaji Lamido Sanusi. I support his view in his recent presentation before northern governors. He emphasized the need to vigorously impact the knowledge of Islam into our people. Rather than putting up mosques at every corner, we should turn some of them into Islamic schools where proper religious knowledge will be imparted into our younger ones about what Islam is all about. And with thorough knowledge of the religion, perhaps it will go a long way in changing the psyche of the younger generations that don’t understand what Islam is all about.

Or how can someone agree to carry bomb to commit suicide and kill people en-masse?! How can someone believe that going to the markets, churches and mosques to kill is part of jihad? That is not in line with what Islam actually teaches. And thank God the Nigerian people have come to realize that Islam is not a violent religion against anybody. They have come to realize that the violence is the act of some people who are blind-folded and misguided by those who capitalize on the abject poverty ravaging the North, especially the North-east. Poverty in the North-east is so real that you can see it walking on two legs. And because of the idleness of the people, they can easily be recruited by telling them that if they die in the process they will make heaven. And remember the common saying that the idle mind is the devil’s workshop.

So, I support Emir Sanusi on his motion to turn some mosques to Islamic centers for proper Islamic orientation for the youth. And I want all of us to support him and encourage the implementation of his thought for the benefit of humanity.

I also urge northern governors to key into that project as some of these mosques are unnecessary. Though we need mosques, we need to impart knowledge of what the mosque stands to represent in terms of Islamic ways of life that border on peace and peaceful co-existence.