The Senior Special Assistant on Public Affairs to President Jonathan, Dr. Doyin Okupe has admitted to have parody the #BringBackOurGirls hash tag for #BringBackJonathan2015 in campaigning for the re-election of the President in February 2015.

Okupe, who was accused to be have championed the #BringBackJonathan2015 hash tag took to twitter to reply critics and acknowledged his wrong.

His tweet, via his handle, @DoyinOkupe, reads: “To parody the #BringBackOurGirls (BBOG) is wrong.” He however further stated that government hasn’t abandoned its efforts to rescue the kidnapped Chibok girls. 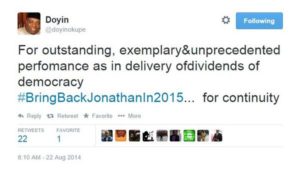 The #BringBackJonathan2015 hash tag has sparked national and international outrage as it is seen as unfair imitation of the popular #BringBackOurGirls which was launched by some activists to campaign for the release of the over 200 girls abducted at Chibok, Borno State, by Boko Haram.

Meanwhile, President Jonathan has directed that the #BringBackJonathan2015 signs and banners in Abuja be brought down immediately.

He gave the directive in a statement by his Special Adviser on Media and Publicity, Dr. Reuben Abati. The President noted that he and Nigerians found the signs and banners offensive and repugnant.

The statement reads: “President Jonathan wholly shares the widely expressed view that the signs which were put up without his knowledge or approval are a highly insensitive parody of the #Bring Back Our Girls hash tag.”