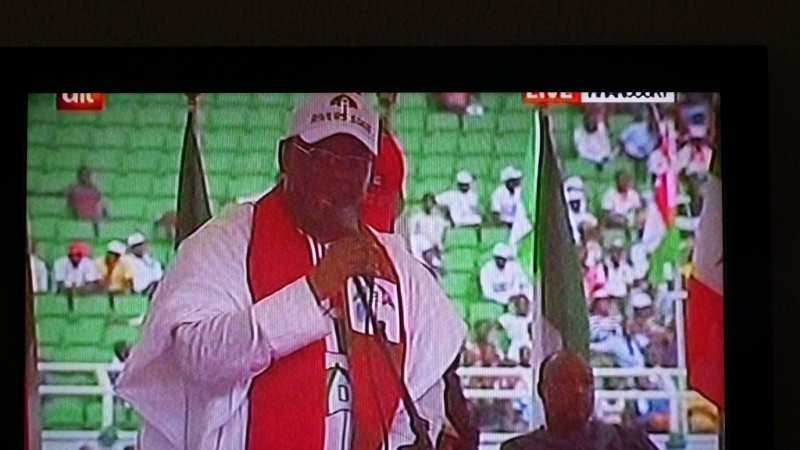 Wednesday’s re-election campaign rally in Port Harcourt by President Goodluck Jonathan has been described as a waste of time and an embarrassment. Reacting to the rally held at the Adokiye Amiesimaka Stadium in the Rivers State capital, the ruling party in the State, the All Progressives Congress (APC), said the poor attendance only served to confirm the unpopularity of President Jonathan and his Peoples Democratic Party (PDP) in the State, while Jonathan merely ended up confirming APC’s claim that the President has done nothing to deserve the votes of Rivers people in the February 14 presidential election.

“To say that President Jonathan and his PDP wasted their time in coming to Rivers State to campaign is to state the obvious. The half-empty stadium despite the renting of supporters from Bayelsa, Delta, Abia and Akwa Ibom states speaks volumes about Jonathan’s unpopularity among our people,” Rivers APC Chairman, Dr. Davies Ibiamu Ikanya, said.

Ikanya in a statement in Port Harcourt said the party was happy that Jonathan during the failed rally personally confirmed that he has done nothing for Rivers State and her people as evidenced by his monumental neglect of the State. He quoted Jonathan as saying: “I should be congratulated and commended for not developing Rivers and Bayelsa states to avoid being accused of being biased in allocating developments to the two States but if we are re-elected we will now concentrate development in these two states.” According to Ikanya, “By this statement, we need no further proof that it was a deliberate act by the President Jonathan administration not only to under-develop Rivers State but also to ensure that the State was stagnated by allocating our oil wells to Bayelsa, Abia and other neighbouring states.”

Rivers APC told the President to stop dreaming of re-election as it will never happen. The party said: “We want to assure you, Mr. President, that you will never be re-elected because you have failed woefully and do not deserve any re-election. After all that Rivers State and her people did for you, you could be so mean not to site one single project in Rivers State. We have no reason for whatsoever to recommend you to any section of this country for re-election.

“It is a pity that out of all the states President Jonathan has visited, it is only in Rivers that he could not name a single development project he initiated, not to talk of executing, apart from posting the tyrannical Police Commissioner Joseph Mbu and supporting every imaginable act of impunity in the State, including the plot by five State Assembly members to impeach the Speaker in a House of 25 members. We can now better understand Governor Chibuike Amaechi, who has at various fora challenged President Jonathan to mention one single development project he has brought to Rivers State.”

Rivers APC vowed to intensify campaigns to ensure that both President Jonathan and the state PDP gubernatorial candidate, Chief Nyesome Wike, do not get up to 10 percent of votes to be cast in Rivers during the February polls. “We will like to assure the entire world that if PDP scores up to 20 percent in these elections we will concede victory to the party,” Ikanya said.

He congratulated Rivers people for staying at home and allowing Mr. President to address a half empty stadium, thereby telling him and PDP in unmistakable terms that Rivers State is fully and squarely an APC State.

If Mr. President and his managers knew that Chief Wike does not exist in Rivers State politically except in the minds of some expired and hungry politicians looking for food to fill their stomach and that he does not have what it takes to mobilize enough people to fill a 50,000 seater stadium in the capacity of the Adokiye Amiesimaka stadium they would have accepted the Liberation Stadium as counseled by Governor Amaechi to see if they could have used the 15,000 supporters hired from some neighbouring States to fill the stadium than embarrassing the President by making him to address an empty stadium in a Presidential rally.