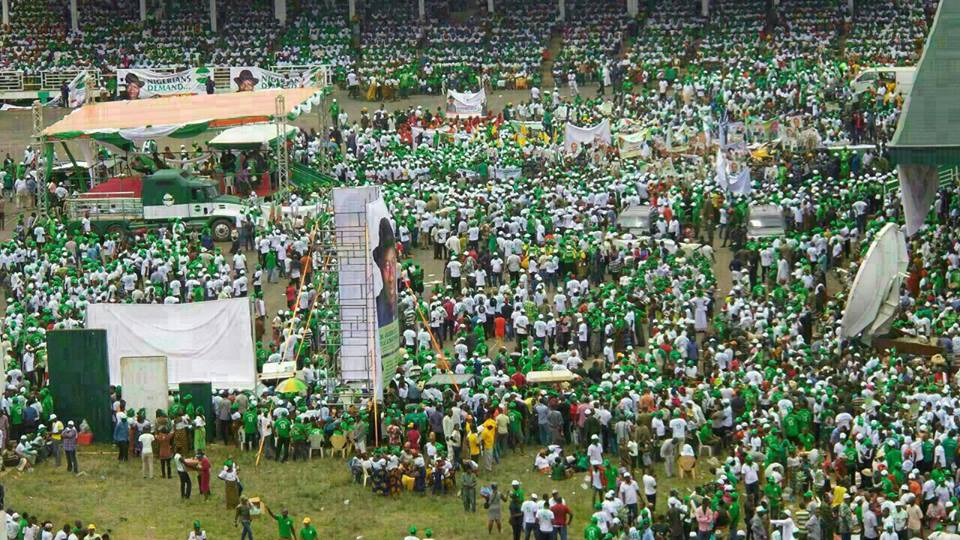 The Rivers State Chapter of the All Progressives Congress (APC) has strongly condemned Saturday’s Pro-Jonathan rally organised in the Rivers State capital, Port Harcourt, by the Transformation Ambassadors of Nigeria (TAN), a group secretly sponsored by the Presidency to promote President Goodluck Jonathan’s third term ambition.

“President Jonathan and his promoters through the misguided elements in Transformation Ambassadors of Nigeria (TAN) have once again demonstrated their hatred and lack of understanding of the plight of Nigerians, particularly those in Rivers State, by going ahead to organise their senseless rally in Port Harcourt even after being alerted of the outbreak of the Ebola Virus Disease in the State by the Minister of Health and other relevant bodies,” Rivers APC said in a statement issuedSunday in Port Harcourt.

According to the party in the statement signed by the State Chairman, Dr. Davies Ikanya, “With this TAN Rally in Port Harcourt, President Goodluck Jonathan and his cohorts have only succeeded in exposing their deep-rooted hatred for the good people of Rivers State, fully aware of the implication of organising such a senseless rally at this period that we are still studying how wicked agents secretly exported Ebola to Rivers State just to endanger the lives of Rivers people. This was after Nigerians had been warned to desist from organising large gatherings. This is the height of insensitivity which will surely spell electoral doom for President Jonathan and his Peoples Democratic Party (PDP) in 2015 and beyond.”

Rivers APC commended discerning sons of Rivers such as Dr. Abiye Sekibo, Chief Uche Secondus, Chief (Dr.) Doris Fisher and Brother Felix Obuah who, despite being PDP chieftains, refused to attend the rally promoted by misguided Chief Nyesom Wike, the Minister of State for Education and PDP Leader in Rivers State. The party said it had taken note of Chief Wike’s courageous declaration during the rally that President Jonathan has not done anything meaningful for Rivers State and her people apart from approving a school on Oil and Gas which is still on the drawing board. “We would however have expected Chief Wike to tell the world that Rivers and her people will never vote for PDP, seeing the injustice and wickedness the State has suffered under the PDP-led Federal Government since President Jonathan assumed office,” Rivers APC said.

The party added: “One thing going for us in River State is that we have a President Goodluck Jonathan of the PDP whose hatred for our State and her people is legendary not minding that he is from our sister State Bayelsa and our in-law and we gave him the highest number of votes that made him the President. Our campaign strategy will be centered on this hatred, which has manifested in the hounding of Governor Chibuike Amaechi, the ceding of our oil wells to Bayelsa and Abia states, refusal to direct Akwa Ibom to pay us the proceeds of our oil wells she kept for many years, wicked refusal to implement the UNEP Report on Ogoni and now the deliberate act to worsen the Ebola crisis in the state by allowing a rally in his honour against wise counsel by those who truly care about the health and well being o Rivers people. Mr. President has left no one in doubt of his deep hatred for Rivers State and her people, so how can we support him or any PDP candidate in 2015?

“In any case, the feats of the Amaechi administration are enough to give us victory in future elections. These feats, which are well known, include making Port Harcourt the World Book Capital City, eradication of militancy, dogged fight for the oil wells and other rights of Rivers State and her people, as well as award-winning achievements in Education, Agriculture, Health, etc.”

Dr. Ikanya said that, in addition to all these, “we will ask the good people of Rivers State to make their choice between the characters and vision of those in PDP (insecurity, ungodliness, etc) and the vision and characters of those in APC (godliness, security and concern for the future of our state). These are the issues for Rivers State to use to decide which of the parties governs the State from 2015.”

Ikanya concluded by advising APC faithful in the State not to panic or fear about the future of the party, as “Rivers people have since adopted APC as the party of their choice and there is nothing the doomed PDP or any other party can do about that.”