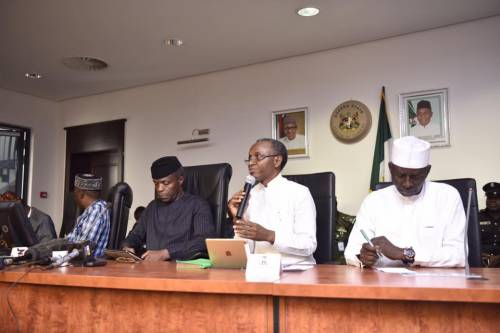 Nigeria’s Acting President, Professor Yemi Osibanjo, on Friday committed himself to being part of a process of dialogue to end the conflict in Southern Kaduna.

He was speaking in Kaduna State to religious and traditional leaders, including Fulani leaders, after receiving situation reports from heads of military and police formations.

Prof. Osinbajo appealed to them to embrace dialogue, noting that failure to accept the path of peace would deepen the crisis, which could consume the Southern Kaduna communities.  He advocated forgiveness among the communities so that they can agree to live in peace irrespective of religion and ethnic differences.

Acting President Yemi Osinbajo addressing a cross section of community leaders“I’m a Christian, and you all know that I’m not just a Christian but a pastor and we know that whenever there is a bloodletting in the land evil continues until it consumes everyone (Christian and Muslim),” he stated.  “In the Bible when Cain killed Abel, the blood of Abel cried for vengeance that led to a continuous circle of bloodletting. Any life lost in the conflict whether Christian or Muslim will bring this kind of continuous evil in the land.”

Committing to a gradual process of dialogue that would bring everlasting peace to Southern Kaduna, he said there was no limit to the amount of time he was willing to spend in the process to see peace return to the area in honor of the lives of all those that have died in the conflict.