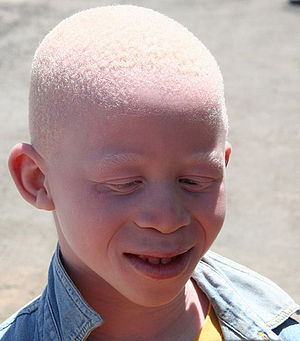 It was a great relief to see an African country like Kenya staging Mr. and Ms. Albino. Anyone that prefers that milk color in his lady, or the closest thing to white, now do have a healthy choice. They may have actually stumbled on many, admiring them without realizing they are Albino and if they do, by the time the character of the Albino comes into play, they would be thanking their stars for such elegant partners.

Preference for light skin is a big factor that leads some African women to bleach their skins. There is no beef against women that completely change the color of their skin but they can be very difficult to recognize if you are used to them in dark skin. As a lady called out one day, it took a third look after she announced her name to recognize her. It was really embarrassing to hide the fact that she could not be recognized at the first take. One has to be careful not to be judgmental. So please just move the conversation along as if nothing changed.

We Heard stories of light skin African kids fathered by European sailors on the shores to time of slavery in the New World. Even when Africans cannot trace their light skins to white ancestors, they have managed to claim Jewish or Arabian heritage. The same is true of African cousins in the Diaspora. Their mother father mother were either Irish, French or Scottish origin. So it’s not surprising that a professor fabricated a history of great Zimbabwe built by Jewish descendants!

More amazing is how easy it is for many of those informed or educated Africans to accept the roles of recessive genes, genetic mutation and slavery relationships with whites but find it difficult to accept the same mutation as it applies to Albinos. Even more doubtful is if some blacks realize there are white Albinos just as there are black Albinos, until they marry one.

Let us face it, the closer black people look as white, the more attractive some of us find them. It is then astonishing that black Albinos are not found to be so gorgeous by the same folks. Lately, in these days of hair in different colors, hues and perms, some beautiful Albino ladies are going for the kill. You may not have noticed if the only beauty you are obsessed with is pale skin color in rainbows. Just as dark southern Europeans have been mistaken for mixed blacks or mulattos.

It must be noted that even ladies that are light in complexion also bleach to look even fairer in complexion. There is no way they were going to be outshined by those dark ladies. Surprisingly, some white women also bleach their skin. It is very difficult to verify the complaints of men that date these ladies. But some movie stars have complained about the cream or soap used for the process. Some men claimed they could not sleep in the same bed with white or black bleachers!

In that case, it would be prudent to date and marry an Albino. They come naturally and remain honest to themselves. If they have to change the color of their hair, perm or cornrow their hair, no problem. Many ladies already do that. It is not such a big deal anymore and most men have gotten used to different hair styles which are easier to take maintain than bleached skin.

Albinos have come a long way from being anxious about their skin to a point where some of them are now proud and confident knowing that if they raise their level of buoyancy, there are people out there desiring them as partners. It is certainly a long way from the days they hid and in some areas still do, from despicable act of medicine men and ritualistic behavior. Many countries have stepped up and increased penalty for any inhuman behavior against them.

Black women have been documented for giving birth to varieties of rainbow children including blue eyes white babies. It is even more so among Hispanic women as their relationships with Africans that are centuries long, may produce a white or black child after generations of recessive genes reappear. After all albinism is a form of genetic change of skin color in all races, not different from those whites acquired after leaving Africa for the new world. We are all Africans at some point, they say!

Gail is a white lady that informed each of her boyfriends the possibility of having a black child if they got serious and get married. She did not have to inform any black boyfriend for reason that was obvious. She lost some white friends that way and also gained some. On the other hand, there is no reason for a black lady to explain the same to a black boyfriend unless she is having an affair with a white man.

As more Africans men grudgingly accept or understand the recessive genes, some women may have used it as an excuse after an affair with white men to pass on white children just as some white women might. There have been a few pictures of these children making news in Europe: of African women giving birth to white babies. Their husbands posed with them making history for scientists. The odds of a recessive gene playing such a role is usually slim but possible.

Nevertheless, most Africans cherish and know the difference between natural white and black beauties. We have some solemn characteristics of black beauty. People of all races, colors and rainbow can easily discern such beauty when they see it because it is striking. If all some people are after is the complexion of the skin, they have done some injustice to their taste. Since we have people that are not so pretty outside but may be sound in character, they missed the boat.

If you are black and you marry a lady for her skin color thinking every light skin is beautiful, you are definitely in for surprises. Your poor children may reflect the not so pretty features. It is even worse if the reason for your taste is bleached skin. Just pray you love your kids whichever way they come out. Children are known to be innocently frank, questioning the complexion of their parents compared to their own.

In the case of Albino, a gorgeous one will produce beautiful children in any color. Even Albinos that are not so pretty are naturally gifted with good characters. It could be that they are trying to make up for their genetic mutation to protect their children and families. The bad ones are just as rough as any other human. We had one popular Albino boy in primary school and he was one of the worst trouble makers with the “baddest” and best jokes around!

Take a good look at Albinos, they are good partners in the family.