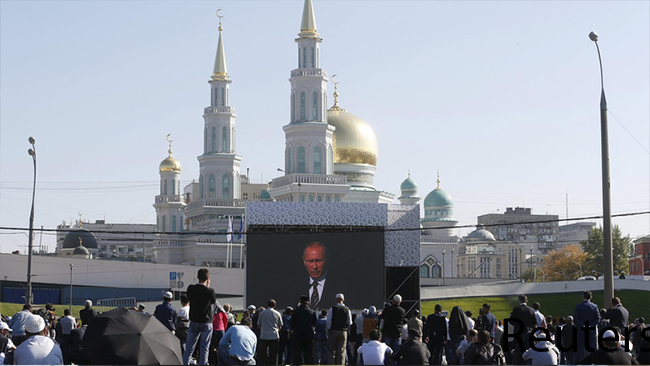 President Vladimir Putin opened Moscow’s new grand mosque on Wednesday, urging Russia’s Islamic leaders to stand against extremism at a time when some 2,400 Russians are fighting with the Islamic State in the Middle East.

Russia, home to some 20 million Muslims, has fought two wars against Chechen separatists in the North Caucasus region — parts of which are mainly Muslim — where an Islamist insurgency is still simmering and some rebels have sworn their allegiance to IS.

Unveiling the new mosque built of light stone, capped with turquoise and golden cupolas, Putin said Russia must educate its Muslim youth to prevent them from becoming religious extremists.

“This work is particularly important today as attempts are undertaken to exploit religious feelings for political purposes,” Putin said during the opening of the mosque, which is said to cost some $170 million.

“We see what’s happening in the Middle East where terrorists of the so-called Islamic State discredit the great world religion, discredit Islam by sowing hate, killing people … destroying the world’s cultural heritage in a barbaric way.”

“Their ideology is built on lies, on open perversion of Islam. They are trying to recruit followers in our country as well.”

Adopting Russian Orthodox Christian terminology for an important house of worship, the building is called the Moscow Cathedral Mosque. Its main golden dome and tall minaret reflect the style of many Orthodox churches, except for the Islamic crescents atop them.

Russia’s Kremlin-backed Council of Muftis said private donations covered the construction of the mosque, including contributions from Kazakhstan and Turkey, whose President Recep Erdogan was present at the opening ceremony.

The new mosque, which can accommodate 10,000 people, was built on the site of an earlier mosque erected in the early 20th century by the Tatar community.

Islam is the second-largest religion in Russia after Orthodox Christianity, making up around 15 percent of the population.

“This mosque will become an extremely important spiritual center for Muslims in Moscow and the whole Russia,” Putin said in a televised speech.

“It will be a source for education, spreading humanist ideas and the true values of Islam.”