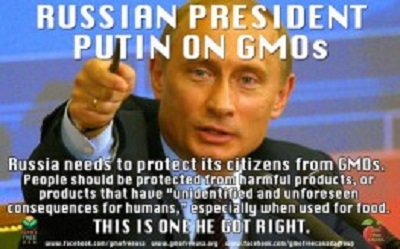 An ominous memorandum from the Office of the President (OP) circulating in the Kremlin today states that President Putin ordered Russian military forces on “full combat alert” yesterday after a nearly two-hour long conversation with President Obama early Saturday morning wherein the Russian leader told his American counterpart: “Stop Monsanto, or we will.”

According to this memorandum, Putin, while visiting the Stavropol State Agrarian University this past Thursday (18 June) was advised by top scientific experts that the ongoing bee apocalypse occurring in the United States is now entering its “gravest stage” and has the ability to threaten the entire global food supply, which in turn could lead to unprecedented unrest around the world.

After receiving this information, this memorandum continues, Putin ordered it to be conveyed to Obama with an “urgent notice” that Russiaexpected the United States to act on these “grave concerns” immediately.

In their subsequent telephonic conversation on Saturday relating to this matter, this memorandum says, Obama “advised” Putin that late Friday afternoon (19 June), upon his receiving the information, he signed an Emergency Executive Memorandum ordering his regime to develop a plan for protecting pollinators such as honey bees, butterflies, birds and bats.

The order Obama sent to all of his Cabinet secretaries and agency heads further stated: “The problem is serious and requires immediate attention to ensure the sustainability of our food production systems, avoid additional economic impact on the agricultural sector, and protect the health of the environment.”

Obama’s emergency order also shockingly states that the number of bee colonies in the United States has declined from 6 million in 1947 to 2.5 million today, and with pollinators such as bees having such a profound economic impact as they contribute more than $24 billion dollars to the US economy could lead to an agricultural apocalypse for America should they disappear entirely.

Though Putin was appreciative of Obama’s immediate action regarding this “grave situation”, this memorandum further notes, he became“enraged” after Obama failed to give assurances that the US-EU backed regime in Ukraine would forbid the introduction of GMO crops into that nation, and which at that point Putin stated, “Stop Monsanto, or we will”,  and within the hour ordered tens-of-thousands of Russian military forcers to immediately go on full combat alert.

Important to note is that Russia shares a 2,295 kilometer (1,426 miles) border with Ukraine and Putin has previously deemed as a “threat to Russian national security” any GMO crops being planted in Ukraine due to the possibility of their “infecting” Russian crops too.

In our 10 May 2013 report “Russia Warns Obama: Global War Over “Bee Apocalypse” Coming Soon”, in fact, we had related Russian leaders “extreme outrage” over the Obama regimes continued protection of global seed and plant bio-genetic giants Syngenta and Monsanto in the face of this growing “bee apocalypse” that the Kremlin warned “will most certainly” lead to world war.

Conclusive scientific proof that the current bee apocalypse occurring in the US is being caused by GMO’s has been known since 2008, this memorandum says, leading to the draft law submitted to the Russian parliament last month seeking to impose punishment up to criminal prosecution to producers of genetically-modified organisms harmful to health or the environment like Monsanto.

Also to note, this memorandum says, is that Prime Minister Medvedev this past April ruled that Moscow will not allow any GMO foods into Russia and earlier this month Russian lawmakers advocated the creation of an international UN agency not only to strictly control the turnover of GMO products worldwide, but with a top priority mission to scrutinize how consuming GMO foods would affect human health in the long run.

Co-author Kirill Cherkasov, member of the State Duma Agriculture Committee, of the bill to criminalize all GMO crops and products in Russiafurther stated: “When a terrorist act is committed, only several people are usually hurt. But GMOs may hurt dozens and hundreds. The consequences are much worse. And punishment should be proportionate to the crime.” [Note: Russian criminal code allows for a punishment starting with 15 years in jail and up to a life sentence for terrorism.]

As to how Obama is protecting his American people from the grave dangers of GMO’s, this memorandum says, is “appalling” as just last March he signed a bill into law that was written in part by the very billion-dollar Monsanto corporation that will benefit directly from the legislation called the “Monsanto Protection Act” that  effectively bars US Federal Courts from being able to halt the sale or planting of controversial genetically modified (aka GMO) or genetically engineered (GE) seeds, no matter what health issues may arise concerning GMOs in the future.

Opposing Obama on the dangers of GMO’s along with Russia, this memorandum concludes, is the European Network of Scientists for Social and Environmental Responsibility (ENSSER), who in an open letter signed by nearly 300 experts in February warned the world:

“As scientists, physicians, academics, and experts from disciplines relevant to the scientific, legal, social and safety assessment aspects of genetically modified organisms (GMOs), we strongly reject claims by GM seed developers and some scientists, commentators, and journalists that there is a ‘scientific consensus’ on GMO safety and that the debate on this topic is ‘over’.”

“We feel compelled to issue this statement because the claimed consensus on GMO safety does not exist. The claim that it does exist is misleading and misrepresents the currently available scientific evidence and the broad diversity of opinion among scientists on this issue. Moreover, the claim encourages a climate of complacency that could lead to a lack of regulatory and scientific rigour and appropriate caution, potentially endangering the health of humans, animals, and the environment.”

To those Westerners disbelieving that Putin would launch a war to protect Russia’s environment against GMO’s one can only say that their lack of knowledge of Russian character has been what has doomed them for centuries in their wars against these peoples, and why they’ve never been conquered.

June 22, 2014 © EU and US all rights reserved. Permission to use this report in its entirety is granted under the condition it is linked back to its original source at WhatDoesItMean.Com. Freebase content licensed under CC-BY and GFDL.

[Ed. Note: Western governments and their intelligence services actively campaign against the information found in these reports so as not to alarm their citizens about the many catastrophic Earth changes and events to come, a stance that the Sisters of Sorcha Faal strongly disagrees with in believing that it is every human beings right to know the truth.  Due to our missions conflicts with that of those governments, the responses of their ‘agents’ against us has been a longstanding misinformation/misdirection campaign designed to discredit and which is addressed in the report “Who Is Sorcha Faal?”.]

Posted by John MacHaffie at 2:03 AM