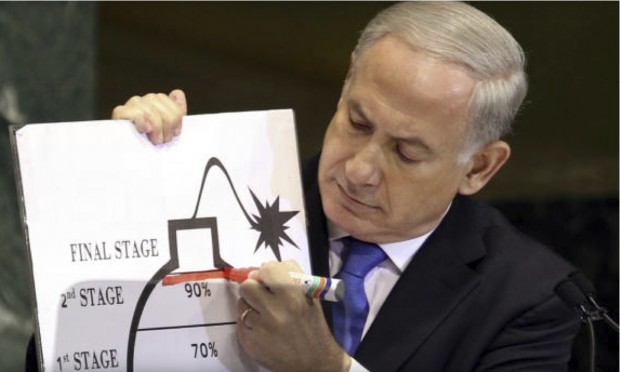 Israeli Prime Minister Benyamin Netanyahu would like to see the al-Qaeda spin-off ISIS attack Iran in a repeat of the Iran-Iraq War, a conflict that lasted eight years and cost Iraq 500,000 lives and Iran more than 750,000.

Netanyahu told the United States to stay out of the fight currently developing in Iraq and allow both sides to annihilate each other. “Don’t strengthen either of them. Weaken both,” he advised.

According to Netanyahu and the Israelis, a comparable or larger death toll resulting from a war between Sunni and Shia Muslims would be preferable to Iran possessing a nuclear weapon.

U.S. and Israeli intelligence, leaders of the Israeli military, as well as the International Atomic Energy Agency have all concluded Iran does not have a nuclear weapon program.

“The United States, European allies and even Israel generally agree on three things about Iran’s nuclear program: Tehran does not have a bomb, has not decided to build one, and is probably years away from having a deliverable nuclear warhead,” Reuters reported in 2012.

Despite this, Israel and the United States continue to portray Iran as a nuclear threat. Israel and Pakistan are the only countries in the region known to have nuclear weapons.

A technician at the Dimona nuclear reactor, Mordechai Vanunu, confirmed the existence of Israel’s nuclear weapons in 1986 and Avraham Burg, the former speaker of the Knesset, said in December the Jewish state has both nuclear and chemical weapons.

Israel and U.S. Engineer Conflict in the Middle East

Israel played a role in the devastating war between the two countries. In 1981 during Operation Seashell it sold Iran $75 million worth of arms from stocks of Israel Military Industries, Israel Aircraft Industries and Israel Defense Forces stockpiles, according to author Ronen Bergman.

“Israel has a vital interest in the continuing of the war in the Persian Gulf, and in Iran’s victory,” then Israeli Defense Minister Ariel Sharon told The Washington Post in May, 1982. This opinion was shared by Prime Ministers Itzhak Shamir of the Likud party and Shimon Peres of Labor.

“To this day, prominent Israelis still argue that strategic calculus unashamedly,” write Johnathan Marshall, Peter Dale Scott, and Jane Hunter. Retired Gen. Aharon Yariv, former head of military intelligence, told a Tel Aviv University conference in 1986 that “it would be good if the Iran-Iraq war ended in a tie, but it would be even better if it continued,” the authors write.

Meanwhile, the United States provided Iraq with weapons. In 1982, President Reagan had Iraq removed from a list of State Sponsors of Terrorism to facilitate the transfer of dual-use technology for the war.

In 1995 Howard Teicher, who served on the National Security Council as director of Political-Military Affairs during the Reagan administration, testified in court during the Iran-Contra investigations:

The same mindset is operative today. Israel and the United States share a desire to balkanize and reduce the influence of Arab countries and the Persian state of Iran. A large body count and untold suffering on the part of millions of victims in a long term conflict between Sunnis and Shias is not a consideration.

ISIS is a product of the proxy war initiated by the United States in Syria against the government of Bashar al-Assad. It was the recipient of training by the U.S. military and received arms via Libya through a “rat line” established by the CIA and the State Department.

War On Terror is a Hoax

The war on terror is a transparently contrived hoax. It is designed to realize order out of chaos and is a remix of the British effort a century ago to reorder and control a resource rich Middle East.

Israel and the United States, however, are playing a dangerous game. The current conflict, while regional, has the ability to spill over borders and adversely effect nations outside of the Middle East, most obviously through a disruption of oil supplies transiting the Persian Gulf. The effect on the world economy would be catastrophic and would undoubtedly precipitate a world war.