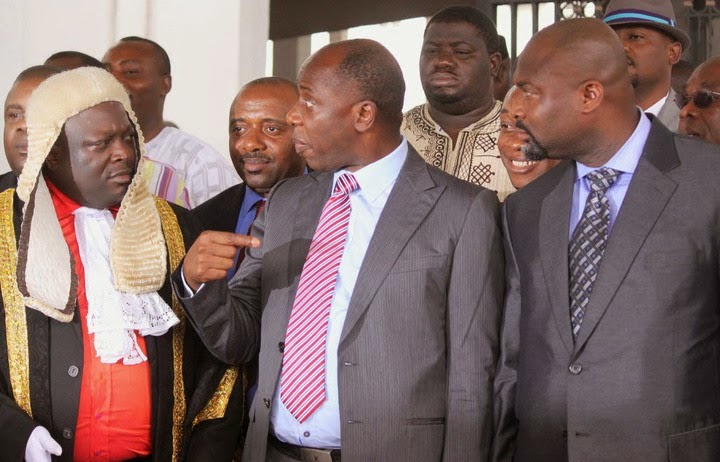 A plot to use six renegade members of the Rivers State House of Assembly loyal to the Supervising Minister of Education, Nyesome Wike, to embark upon impeachment procedure against Rt. Hon. Chibuike Amaechi, the Executive Governor of Rivers State and Chairman of the Nigeria Governors’ Forum (NGF), has been brought to our notice. To us, this is ridiculous, the highest form of impunity, an invitation to anarchy and a booby trap which could truncate our nascent democracy.

That six rebel troublemakers in a House of 32 lawmakers should talk of impeaching a sitting Governor is not only absurd, undemocratic but illegal. We wish to reiterate that this unwarranted plot is an evil scheme against the people of Rivers State which is capable of not only truncating our hard-nascent democracy but also throwing the entire nation into unprecedented political crisis of which consequences maybe hard to be determined.

This plot termed, ‘WHY AMAECHI MUST GO’, arises from the fear by PDP leaders that if Governor Amaechi stays in office till next year’s elections, President Goodluck Jonathan winning the next presidential election would become an uphill task…

Hastily trying to justify this illegal act, Chief Wike had declared in Port Harcourt some days ago that Amaechi had committed many impeachable offences and should be removed. We understand that these rebel lawmakers have met in the private home of one of the PDP chieftains in Old GRA in Port Harcourt and will regroup at Krisdera Hotel owned by the State Chairman of PDP, Mr. Felix Obuah, in Omoku, headquarters of Ogba/Egbema/Ndoni Local Government Area, Rivers State, on 26th June, 2014, to pass a ‘motion’ to impeach Governor Amaechi.

What a ridiculous move by a misguided group! Nobody should, however, dismiss this plot with a wave of the hand in view of recent happenings in Adamawa State, an another All Progressives Congress (APC) State
where the account of the State Government was frozen without the Governor of the State being impeached. It would certainly be naïve to say that this cannot happen in a nation where some sitting Governors can be stopped from attending a fellow Governor’s rally not minding their immunity as contained in the country’s constitution! A nation where Ekiti Commissioner and APC leaders were arrested and branded as terrorists! A nation where a corrupt Minister can dare the National Assembly and refused to present herself for investigation!

The decaying and dying PDP Government at the centre, seeing its rejection by Nigerians come 2015, is capable of doing anything to retain power should Nigerians watch some of these undemocratic acts without any condemnation. We therefore appeal to past Presidents, Nationalists and Traditional Rulers to call the Presidency and PDP Agents to order before they plunge our nation into a mighty chaos that may consume all of us before it is too late.

We can now understand why the Nigerian Judicial Council (NJC) is hell-bent on imposing Justice Daisy Okocha as the Chief Judge of Rivers State in disobedience of a High Court judgment that she should not be considered or renominated for the office of the Chief Judge of Rivers State. The insistence of the NJC to impose this woman on Rivers State is an affront to the Nigerian Constitution. Such an appointment is null and void and of no effect. It is sad that NJC should allow itself to be messed up in this form by ungodly politicians, knowing very well that there was a judgment of a competent court headed by Honourable Justice Lambo Akanbi of the Federal High Court, Port Harcourt, upon which the State House of Assembly and Governor Amaechi acted in clearing and swearing-in Justice Peter Agumagu as the Chief Judge of Rivers State. In the said judgment, NJC was a party. NJC has a right of appeal but under Part 1, Section 21 (d) of the Third Schedule of the 1999 Constitution, the NJC has no power to suspend Justice Agumagu or impose Justice Okocha on Rivers State.

We view the move by NJC as expectant and in lieu of the current madness by this six rebel and renegade lawmakers but, sadly for them all, we cannot accommodate or accept six confused lawmakers whose leader, Evans Bipi, representing Ogu/Bolo Constituency, was cautioned by a High Court to stop parading himself as a Speaker. Hon. Bipi is obviously playing with fire as he has been barred from parading himself as Speaker by a court of competent jurisdiction. The order of the High Court of Rivers State, Ahoada Judicial Division, given on December 16, 2013, is unequivocal. He should also note that none of his undemocratic sponsors will come to his aid when he is committed to prison. His Lordship Hon. Justice C. N. Wali in his judgment did not only bar Hon. Bipi but also declared that we have one single House of Assembly in Rivers State under the leadership of Rt. Hon. Otelemaba Amachree. We expect the rebel lawmakers to fall in line and respect the leadership of the House and avoid further heating up of the polity. They should come to terms with the fact that their plot has failed like a pack of cards.

We are at a loss that instead of Mr. President and his cohorts preoccupying themselves with rescuing the over 200 abducted Chibok girls and arresting the menace of Boko Haram, the Presidency is busy fuelling crisis in APC states such as Adamawa, Rivers and Edo, inducing the lawmakers to start impeachment procedures against their Governors. This is madness and must be stopped before the nation is plunged into a monumental political crisis from which it may never recover as one united entity.