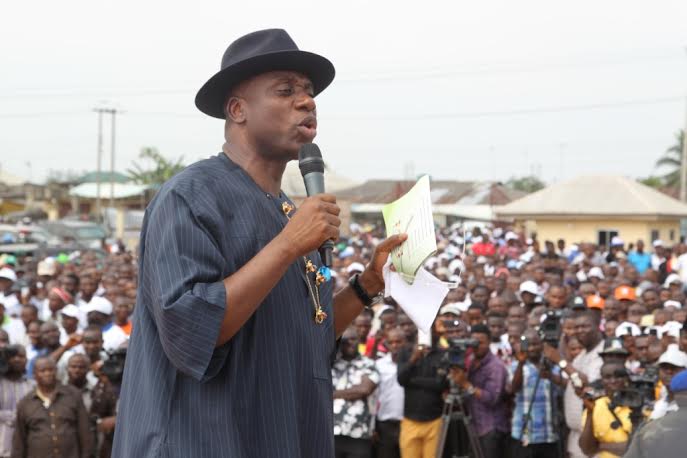 Rivers State Governor, Rt. Hon. Chibuike Rotimi Amaechi, put his detractors to shame by braving the odds to attend yesterday’s rally organised by the Save Rivers Movement (SRM) in Ogoni land, the state chapter of the All Progressives Congress (APC) has said.

“Against all odds, Governor Amaechi once more proved to be a man of his words by attending the rally against the misguided advice of his detractors, who resorted to scaremongering to dissuade him from doing so. By so doing, Governor Amaechi once more proved that he would never abandon his followers but would always be in the forefront of the crusade to defend the rights of Rivers people no matter the degree of danger ahead,” Rivers State APC Interim Chairman, Dr. Davies Ikanya, said in a statement issued today in Port Harcourt.

Ikanya, who also attended the rally and was moved by the huge attendance by APC faithful and Ogoni people, declared Governor Amaechi as The People’s General and emancipator of the people of Rivers State.

“Contrary to the impression being created by Amaechi’s detractors that he is a promoter of violence, the Ogoni rally went peacefully and successfully without any incidence of violence, thus putting the opposition Peoples Democratic Party (PDP) and CP Mbu to shame,” Ikanya said.

He commended Governor Amaechi for his inspirational speech at the rally held at Bori in Khana Local Government Area, saying: “By making a strong case for the implementation of the UNEP report on the need for the cleanup of Ogoniland – which the PDP-controlled Federal Government has so far sabotaged – Governor Amaechi left no one in doubt of his great love for Ogoni people and his commitment to ensuring the development of Ogoniland.”

The Rivers State APC Interim Chairman commended the Inspector General of Police, Mr. Mohammed Abubakar, for providing enough security for the rally. He condemned the controversial Rivers State Police Commissioner, CP Joseph Mbu, for encouraging the disruption of the previous rally scheduled for last week Sunday by armed hoodlums, describing him has an enemy of Rivers people.

Dr Ikanya wondered how a Governor who has contributed much to the development of Policing in Nigeria should be so disparaged, maligned and facing the type of persecution Gov Amaechi is currently going through in the State. He recalled that Gov Amaechi purchased and donated over 7 Armored Personnel Cars (APC), bought over 200 patrol Vehicles for the Police, pay allowances to the Police, trained most of them and employed the wives of those that died in the cause of the struggle to free Rivers State from militancy which CP Mbu and his cohorts are bringing back to harass our people; this simply demonstrates that CP Mbu is either misguided or just evil. All these notwithstanding, the fact remains that “The blood of the two innocent people killed at that aborted rally as well as the blood of all those killed in the needless violence orchestrated by CP Mbu in connivance with Rivers PDP is on Mbu’s head,” Dr. Ikanya said.

Dr Ikanya commended all members of the National Assembly particularly Hon. Chief Andrew Uchendu who reaffirmed that all the 37 members of the House of Representatives that have dumped PDP for APC will never go back to the sinking ship of PDP. He congratulated Hon. Chief Dakuku Peterside Chairman, Downstream Petroleum Committee of the House of Representatives, Deputy Speaker Rt. Hon. Leyii Kwanee and members of the Rivers State House of Assembly, SSG George Feyi and all the State Executive Council members that attended, Chief Tony Okocha the Chief of Staff to Governor Amaechi, Leadership of APC, SRM, Journalists and all the Ogonis that braved all odds to attend the rally.

He predicted a rosy future for APC in Rivers, saying that “the enthusiastic way in which the people of the state have embraced the party is an unmistakable signal to PDP that it has been vehemently rejected by Rivers people.”