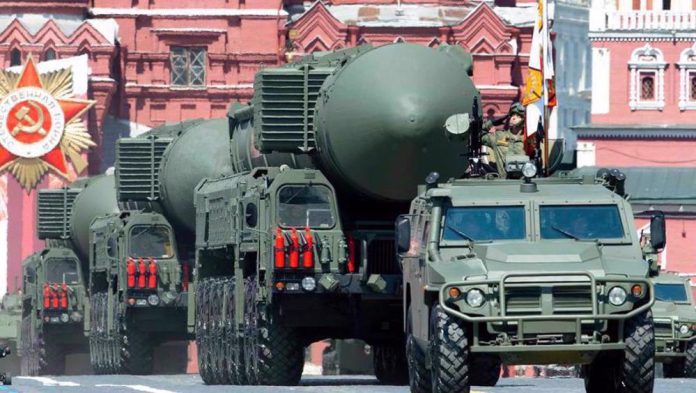 “Top officials of leading NATO nations indulge in making aggressive statements about our country,” Putin told a briefing on Sunday.

“Therefore, I am ordering the minister of defense and the chief of the general staff to put the deterrence forces of the Russian army into special combat duty mode,” he added.

The announcement came a day after Germany and other European countries said they would speed weapons and other military assistance to help Ukraine battle Russian forces. It also followed a warning by UK Foreign Secretary Liz Truss that if Russia’s military operation in Ukraine was not “stopped,” it could lead to a conflict with NATO.

“…if we don’t stop Putin in Ukraine, we are going to see others under threat: the Baltics, Poland, Moldova. And it could end up in a conflict with NATO,” Truss said on Sunday.

NATO has escalated its war of words against Russia since Thursday, when Putin announced a “special military operation” aimed at “demilitarization” of the Donetsk and Lugansk Republics in eastern Ukraine.

The regions broke away from Ukraine in 2014 after refusing to recognize a Western-backed Ukrainian government that had overthrown a democratically-elected Russia-friendly administration.

More than 14,000 people have been killed so far across the regions as a result of the conflict that ensued between the Ukrainian military and the pro-Russian separatists.

Announcing the operation, Putin said the mission was aimed at “defending people who for eight years are suffering persecution and genocide by the Kiev regime.”

White House spokeswoman Jen Psaki condemned the Russian president’s decision later on Sunday, suggesting it was part of a “pattern” of “manufacturing threats that don’t exist to justify further aggression.”

A day earlier, the leaders of the alliance held an emergency virtual summit to “condemn in the strongest possible terms” what they called “Russia’s full-scale invasion of Ukraine, enabled by Belarus.”

Also on Sunday, the European Union’s foreign policy chief, Josep Borrell, said the bloc would provide $500 million in lethal and non-lethal aid to Ukraine, while closing its airspace to Russia and banning some Russian media outlets.

The Western campaign comes while Russia has asserted that its military operation in Ukraine is only aimed at “military targets,” and, therefore, posed no threat to civilian lives.

Also on Sunday, Moscow announced that so far during the operation, it had hit over a thousand Ukrainian military sites.

Attending a United Nations Security Council meeting on Ukraine, the Russian ambassador to the UN slammed the West’s disinformation campaign on the Ukraine conflict, saying Russia’s forces never attack civilians or civilian infrastructure during their operation.

Nebenzya said the real threat to Ukrainian civilians came from the Ukrainian forces, not from the Russian army.

Meanwhile, the Ukrainian president’s office said negotiations with Moscow would be held at the Belarusian-Ukrainian border.

“I do not really believe in the outcome of this meeting, but let them try, so that later not a single citizen of Ukraine has any doubt that I, as president, tried to stop the war,” President Volodymyr Zelenskiy said.