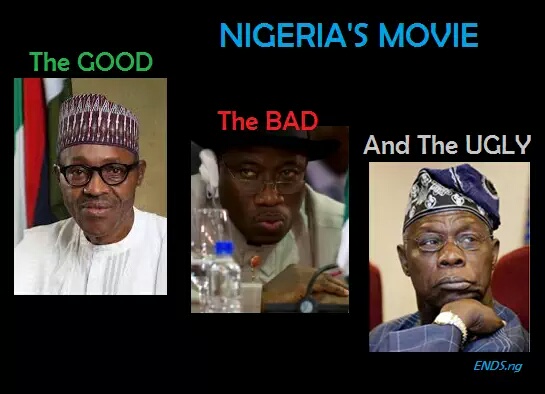 Well, let me start by saying, all men are evil to Nigeria and humanity

First, Obasanjo: monies where missing, people killed, government was down in view of education, infrastructure:- roads, hospitals, transport, economy was down going by the day and generally, activities where not getting better by the day. However, he has shown some level of sanity in terms of corruption. People like Saminu Traki where put before trial, even though not conclusive, tafa balogun and a few more. Corruption was checked at a point until it became a thing for those in power.

There was a bit of improvement in terms of telecommunication even though Baba Iyabo had it his way for sometimes. Exchange rate was not too good but manageable. Food stuffs in the market where high but we all manage. Power generation (electricity) was bad that we all have to calculate time to catch up with the timing to accomplish set targets with the power. This is just to mention but a few.

Second, Jonathan: what can you really point out in line to those mentioned above that has been achieved by Jonathan. Is it the boko haram that he had allowed to become stronger by the day or, is it the power supply that has improved? You don’t know when the light will come not to talk of timing it to do something.

Corruption was a fashion. He is fighting corruption in a digital way and don’t want to jail anyone. Ooh! Stilling is a mere theft. Come to talk more, a minister was pointed out that she had stolen monies, what he did; he (jonathan) was the minister jam boring round the world.

Assets declaration, “I don’t give a dam”. That is a president talking. Kidnaping was also a thing of the day. Generally, security was at zero. Internationally, no nation wants to partner with Nigeria. Our reputation was at zero. I can go on and on and on. The list is endless. Worst of all, in his village, he could not provide them with good water to drink and for domestic use; it was the JTF that sank borehole in the village. What a shame.

In conclusion, I come to believe that Jonathan Eblele Goodluck is below the zero point. Shame on him!

Is Kazakhstan Russia’s next Ukraine?

#REACTIONS: If @elRufai Bows To You Be Careful, He Wants To Destroy You.