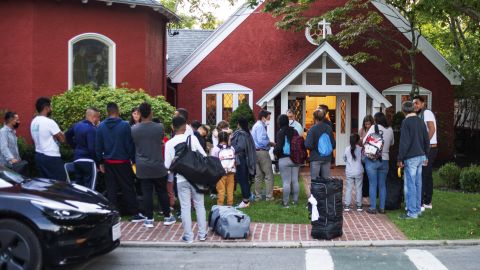 It’s the latest in a series of moves by Republican governors to transport migrants to northern liberal enclaves to protest what they say are inadequate federal efforts on southern border security. Located off the coast of Massachusetts and long known as a posh summer destination for wealthy vacationers, Martha’s Vineyard provided an unusual and unexpected place for the migrants to be sent.

Lawmaker says DeSantis used migrants for his own political benefit
“We are not a sanctuary state, and it’s better to be able to go to a sanctuary jurisdiction, and yes, we will help facilitate that transport for you to be able to go to greener pastures,” DeSantis said on Thursday, a day after claiming credit for sending the two planes to the island. “Every community in America should be sharing in the burdens. It shouldn’t all fall on a handful of red states.”

US Attorney for Massachusetts Rachael Rollins told reporters on Thursday that she will speaking with members of the Department of Justice about DeSantis sending the migrants to Martha’s Vineyard, saying she did not yet have enough information to say whether he broke any laws in doing so. She added that their first priority is making sure the people who arrived were treated respectfully.

James Hagerty, the Edgartown town administrator, told CNN on Thursday that officials believe all of the migrants originated in Venezuela, and a local fire chief said earlier in the day that the migrants include seven families, with four children ranging from 3 to 8 years old.

At least 140 asylum seekers arrived in New York Sunday on buses in what the New York City Mayor’s Office of Immigrant Affairs is calling the largest single-day arrival of migrants from Texas, according to a spokesperson.
‘The future is here.’ Migrants step off buses from Texas into New York homeless shelters
“There was no advance notice to anyone in Martha’s Vineyard or Massachusetts that these migrants were arriving to my knowledge,” Cyr said.

Municipal officials and state officials are in touch about next steps, but Cyr stressed that the focus right now is supporting the migrants who arrived.

In addition to response efforts by locals on the island, the Massachusetts Emergency Management Agency is expected to be on the ground to coordinate efforts.

Terry MacCormack, press secretary for Republican Massachusetts Gov. Charlie Baker, said in a statement obtained by CNN affiliate WBZ, “The Baker-Polito Administration is in touch with local officials regarding the arrival of migrants in Martha’s Vineyard. At this time, short-term shelter services are being provided by local officials, and the Administration will continue to support those efforts.”

“Even for Ron DeSantis, this is a new low,” Florida Democratic Chair Manny Diaz said in a statement. “There is nothing that DeSantis won’t do, and nobody that he won’t hurt, in order to score political points.”

Charlie Crist, the Democratic nominee for governor of Florida, said in a statement, “This is just another political stunt that hurts our state. Tonight, the 4.5 million immigrants who call Florida home must be wondering if they’re next.”

Migrants wait near the residence of US Vice President Kamala Harris in Washington, DC, after being dropped off Thursday.
Two buses of migrants dropped off near the vice president’s residence in Washington
And the White House on Thursday denounced both DeSantis’ move and a decision by Republican Gov. Greg Abbott of Texas to intentionally send two buses of migrants to Vice President Kamala Harris’ residence in the nation’s capital. Those migrants have been safely transported to a local church, according to a Department of Homeland Security spokesperson.

The latest moves follow in the footsteps of Republican Gov. Doug Ducey of Arizona, who began sending migrants to Washington, DC, earlier this year. Abbott has since expanded his effort to include New York City and Chicago.

Migrants released from government custody often move to other cities in the US as they go through their immigration proceedings. It’s unclear whether the migrants who arrived in Martha’s Vineyard knew where they were going.

Locals take action
Despite the unannounced arrivals, some residents of the island worked quickly to provide some key services.

“This is a community rallying to support immigrants children and families. It is the best of America,” Massachusetts state Rep. Dylan Fernandes, a Democrat who represents the island, said in a series of tweets that included photos of the migrants receiving food and beds.

“Our island jumped into action putting together 50 beds, giving everyone a good meal, providing a play area for the children, making sure people have the healthcare and support they need,” Fernandes wrote in another tweet. “We are a community that comes together to support immigrants.”

Officials on Martha’s Vineyard say they are working with a coalition on the island to provide “shelter, food, and care to individuals” who arrived on the island Wednesday, according to a statement from the county Emergency Management Association.

The Edgartown Police Department said no further supplies are needed for migrants who arrived Wednesday and asked that people refrain from dropping off additional items in order to keep traffic flowing.

The resources from a programmatic standpoint include coordinating food, clothing, and translator services, the representative said.

The migrants slept at St. Andrew’s Church Wednesday night, which often assists in housing those in need, the representative explained.

Some of the migrants Thursday morning reported feeling cold and the service center assisted in bringing over more clothes, the representative said.

Meanwhile, Hagerty said on Thursday that the migrants were allegedly told before arriving on the island that they would be provided with jobs and housing there.

“They had community service packets provided to them before they got off plane,” he said, adding that he wasn’t sure what third party provided the packets of information to the migrants.

CORRECTION: This story has been updated to reflect that the Massachusetts Emergency Management Agency is participating in the response to the migrants’ arrival. It also has been updated with additional reporting.

Male escort reveals how he rakes in $10,000 a month sleeping with women and a quarter of them are married