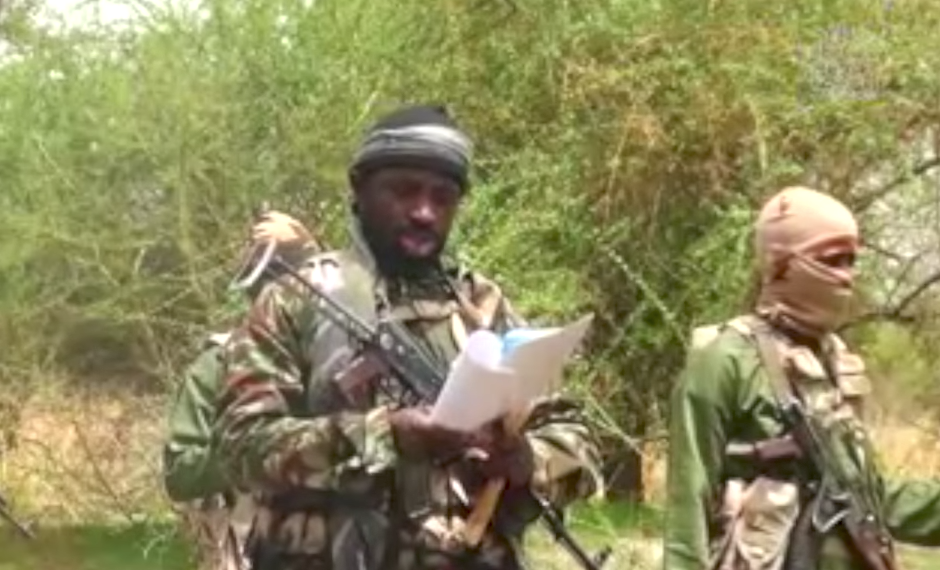 The shadowy leader of Boko Haram, Abubakar Shekau, in a new video, claimed victory in the Thursday attack on Maiduguri, Borno State, boasting to use the arms allegedly seized by his men from fleeing soldiers to carry out more attacks on the city.

The police and the Nigeria military had in separate statements issued on Friday said the attack on Maiduguri was effectively repelled and that three Boko Haram fighters were killed, while one was captured alive.

Mr. Shekau also boasted that his group was invincible saying the Nigerian government must accept Islam and repent from its ‘evil ways’, as a precondition for ceasefire.

The 23 minutes video released via YouTube was preluded by a man in military combat uniform walking over a large cache of live ammunition, boots, helmets of soldiers, mobile handsets, military ID cards, booklets and drugs which the character claimed were seized from Nigeria soldiers after the attack.

Speaking Hausa, the character narrated how the group successfully invaded Jiddari suburb of Maiduguri and overpowered soldiers, who he claimed fled.

He said the ongoing war will continue for a long time and would be inherited by the terrorists’ children and grandchildren just like the situation in some parts of the middle east.

The video showed a footage of the insurgents driving in Hilux vans into Maiduguri by manoeuvring the Sand hill and trenches built to surround the city. They created an emergency bridge over the trench to allow their vehicles pass through.

Afterwards, the video showed Mr. Shekau in a jungle environment, standing in front of the armoured vehicles and flanked by three armed men. He was dressed in a military khaki, with a turban around his head and an AK-47 gun hung across his chest. His right hand clutched a huge chewing stick, which he occasionally used to brush his teeth as he spoke; while his left hand held a spiral-bounded booklet from which he read out his message in Arabic and later translated into Kanuri and Hausa.

“I am Abubakar Shekau, leader of the group known as Jamaatu Ahlil Sunna Li Dawati wal Jihad. We give thanks to Allah the exalted for bringing us to this day.

“We are happy and we are bringing glad tidings to our brothers who are spread all over the world that God has given us victory after He has safely taken us to the city of Maiduguri, where God has assisted us to chase the infidel soldiers and gave us victory over them.

“The soldiers are out there searching for us in Sambisa forest, but here we are bringing war to them in the township. We came to the city of Maiduguri and got to Jiddari suburb of Maiduguri and the soldiers saw us and fled. They have lied once again to the world that they had killed us. But that was not true. Nothing happened to our fighters. We went there and God helped us to chase the infidels. It is not our doing; but God’s. We went to Maiduguri and killed all that deserved to die and God also helped us to kill them.

“And here are the magnitude of arms and munitions that God has enriched us with. Here we have different bullets for Mark-4, Kalashnikov, hand grenades, and even ID Cards of senior military personnel which we have retrieved from the soldiers and we shall use them to fight them in this war. You shall all see us.

“This is not our wisdom of prowess; it is the support of Allah.

“So, let all our brethren know that the war is there ahead because it has just started.

“We have looted their ammunitions, we have their phones and cellular devices. You all know that all we have and display in this video belongs to you because we did not go and buy them.

“This is a war that our children and grandchildren will inherit from us and carry on with it. It is not a war that can be stopped or finished at once. So, stop lying to the world that you have killed us all when we went to Maiduguri. God took us there, and we fired all the shots into the city; the people of Maiduguri know the truth. Your soldiers fled upon seeing us; that was why God enriched us with the arms and munitions they had left behind.

“You wait and be ready for us; we shall come to you again. We are going to bring the war to you in wherever you all are. God has instructed us to search for you and kill you all, just like you are searching for us in the bushes. We shall bring the war to the cities, so you all should get prepared. For the war has just begun.

“Let the world know that we are alive and well in the bushes; nothing has happened to us; we are living our normal lives and observing our Ramadan fast just like the way every other person is doing.

“Let General Buratai, the Chief of Army Staff, know that he is not enough to deal with us. You need to know that there is no way you could end this war by killing us as you usually claimed. Our brethren in Chechnya and Somalia have been in this kind of war for over many years and it is still ongoing. The same applies to Afghanistan, Iraq, Yemen and Syria as well as Libya. So, do you imagine that you could just come and defeat us at a time? It is not possible.

“The only way out for you is to accept Islam in the proper way and repent your sins. The dispute between you and us is your lack of worship. If you come and do the proper worship of God in Islamic way, then the war would be no more.

“We have no dialogue or truce between you and us. Don’t lie to the world about it; there is never any peace deal between us. What we have between us is fire for fire; rife for rifle. If you repent and become true Muslims then we will lay down our rifles and then we will all come to do proper Sharia.

“To the Civilian-JTF, you should stop wasting your time. You should know that if such kind of vigilante could help you, we would have ceased to exist by now. So, go and repent and come to worship because. Like the infidel soldiers are not sparing your lives so shall we not spare you.

“Our interest is not in killing you, but to see that you accept true worship of God.

“This is our brief message, we invaded Maiduguri and God has helped us to come out safely.”