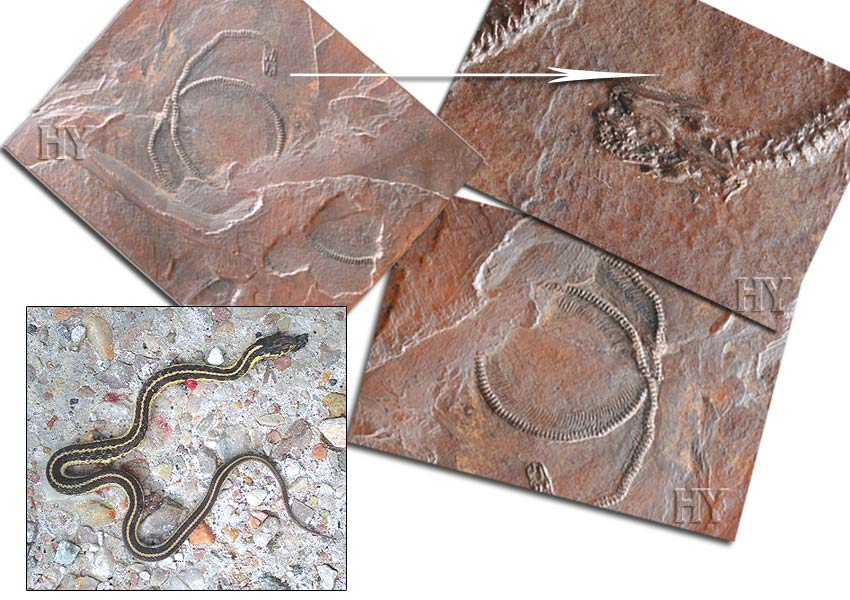 Science magazine published another so-called “evolution report” in its October 2016 issue. The report claimed that the small bones in the tail of the boa snakes’ bodies are the remnants of the imaginary legs that these creatures supposedly possessed in the past.

The claim that the small bones of Boa constrictors prove evolution is not only a major flaw in reasoning but also a serious scientific mistake.  This is because, contrary to the claims, these bones in boa constrictors are small claw-like structures located near the tail. These are claw-like structures are used by the boa to mate and to defend themselves against other male boa constrictors.  They are in no way mechanical structures that can sustain the weight of the body like legs do. In other words, they do not have a structure suitable for walking.

Furthermore, a large number of boa fossils have been discovered to date. For example, Pachyrhachs problematicus and Haasiophis terrasanctus are ancient boa and python fossils and clearly demonstrate that the boa constrictors and pythons that lived in the past shared the exact same anatomical features as their living counterparts.  In other words, contrary to claims, neither pythons nor boa constrictors have undergone any change and that they have remained the same for millions of years and have not evolved.

All the snake fossils that have been uncovered to date clearly refute the idea that snakes had legs 100 million years ago but in time, lost them.

RESPONSE TO CLAIMS OF THE GENETIC MUTATION EXPERIMENTS

In the same news report, Science tried to support the claim of ‘snake evolution’ with a ‘so-called’ scientific experiment.  Martin Cohn from the University of Florida claimed that he found three DNA deletions in the genetic switch that controls the activity of a gene in pythons when compared to different reptile species and different snakes, and attempted to present this finding, which was only an assumption, as the reason for the loss of legs in pythons. Furthermore, after carrying out similar experiments with mice, they suggested that ‘…the fact that legs did not grow in that experiment’ was also supporting their claim.

First of all, the statement in the report ‘…DNA codes in three different sites were deleted’ should be carefully examined:  In the study, the researchers made the assumption that these codes had been deleted based on the comparison they made with the DNA of other reptiles and other snake species. This is a faulty and more importantly, a biased way of thinking; it is quite natural that the DNA found in other reptiles or snakes does not exist in pythons. That is because these genetic differences separate one living being from another. Every snake species, like pythons, vipers and boas, all have their unique DNA, and it is these differences in their DNA that separate them from each other.

Moreover, the fact that the mice subjected to mutation experiments did not grow legs certainly does not constitute evidence for the evolution of snakes; on the contrary, it indicates the destructive effect of the mutation.

In a living being with legs, when the gene controlling leg development is altered, it is only natural that leg growth will not occur: This is not new information. This is the fundamental logic behind mutation.  Each gene has its own task, and even if only one of these genes undergo mutation and become incapable of carrying out that task, crippled, disabled creatures will emerge just like it did in these mice experiments.

All of these claims have been put forward with the presumption that “evolution really occurred”. Assumptions made based on these experiments were also interpreted with this “pre-acceptance”.  For this reason, they do not represent an objective and unbiased view, but are simply “interpretations” intentionally adjusted for evolutionary propaganda. The truth is, scientific facts have always refuted evolution.

Until today, many snake fossils dating back 150-160 million years ago, have been discovered and these fossils are almost like detailed photographs of the snakes of that period engraved on stone.  In fact, these fossils are even more genuine documents than photographs in the fact that they are the original remains of the creatures themselves.

If a snake that used to have legs really lost those legs later on, countless snake fossils should have been found with one leg newly forming and the other missing, which are in the so-called “leg -loss process” that is claimed to have lasted for millions of years. However, until now, not a single such snake fossil has been found. Not a single transitional fossil has been found so far nor it is possible to find one.  Evolution is the greatest fallacy in history, which has been debunked by scientific evidence, yet there are still efforts to keep it alive.

In other words, these evolutionary claims of Darwinist magazines are nothing but another desperate struggle of Darwinism in the face of the crushing defeat it has suffered worldwide.

The theory of evolution has been razed to the ground through the growing number of scientific studies  with each passing day and millions-year-old fossils unearthed every day.

Say: ‘Truth has come and falsehood has vanished. Falsehood is always bound to vanish.’ (Surah al-Isra’, 81)