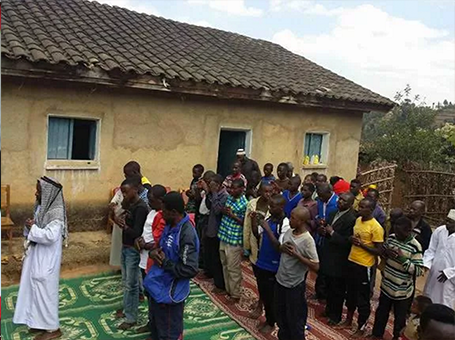 A Rwandan pastor has made the record of conducting the largest conversion of Christians to Muslims on Tuesday, August 25.

Africa Metro reports that the pastor, Salim Mikdad, converted all 480 members of his congregation to change their faiths.

According to one of the members, they were at the Church for when their pastor forced them to convert to Islam. Pastor Mikdad also converted the church premises into a mosque during the conversion ceremony. This is said to have happened after an Islamic cleric had preached to Pastor Mikdad and succeeded in converting him to Islam.

According to Africa Metro, Rwanda is a predominantly Christian country but of late, has seen a gradual rise in its Muslim population. About 56.9% of Rwandans are Roman Catholic, 26% are Protestant, 11.1% are Seventh day Adventist and only 4.6% are Muslim, most of them being Sunni.

Islam started growing in Rwanda after the country’s 1994 genocide as both Catholic and Protestant churches helped to make the killing of about 800,000 people possible by giving moral sanction to the murders. Churches have longed played ethnic politics themselves, favouring the Tutsi during the colonial period then switching allegiance to the Hutu after 1959, sending a message that ethnic discrimination was consistent with church teaching.

Meanwhile, hell was let loose yesterday, Sunday, August 30, at the United Methodist Church, in the Oshodi area of Lagos, when church members pursued their pastor off the pulpit.